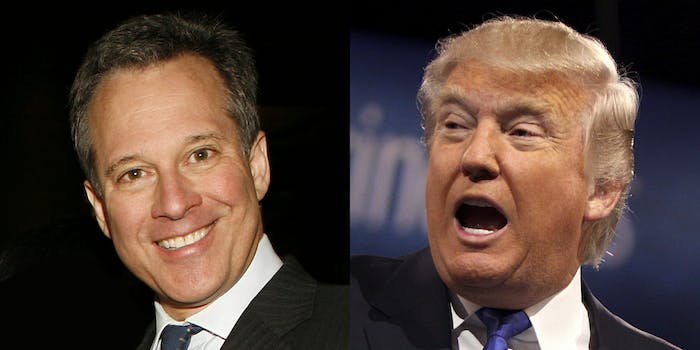 You never know when the mean things you say about someone could come back to haunt you. For President Donald Trump, that time is now.

The partnership expands the probe into Manafort and, importantly, robs Trump of one of his most powerful tools to influence the Russia investigation, which includes looking into whether members of Trump’s team colluded with Russian operatives to meddle in the 2016 presidential election.

At issue is Trump’s presidential pardon powers. Last week, Trump pardoned former Arizona Sheriff Joe Arpaio, whom a federal judge found in contempt of court. The peculiar pardon—Arpaio had not yet been sentenced and did not formally request a pardon, which is standard procedure—raised a question: Did Trump pardon Arpaio to set precedent for him pardoning members of his campaign who refuse to cooperate with the Russia investigation?

Thing is, presidential pardons only apply to federal crimes. By joining forces with Schneiderman, Mueller has expanded the investigation to the state level where Trump has no pardon power.

So how might Schneiderman handle an investigation with the potential to topple a sitting U.S. president? In the case of Trump, it’s unlikely he’ll be kind—the two have had a contentious relationship for years.

Back in 2014, Trump attacked Schneiderman and accused him of potentially being a “cokehead.” The claim stems from an allegation that someone once witnessed Schneiderman snort cocaine when he was a state senator.

Trump also called him a “lightweight,” the “worst attorney general in the U.S.,” and a “loser.”

Lightweight @AGSchneiderman, the worst attorney general in the US, is in a tough election with John Cahill @CahillForAG

Lightweight @AGSchneiderman is driving business & jobs out of NY. Only wants self publicity—a total loser!

This summer is very tough for the nation’s worst AG @AGSchneiderman. Moreland Commission is his disaster.

In other instances, he accused Schneiderman of wearing eyeliner.

It's Tuesday. @AGSchneiderman is wearing Revlon eyeliner today. Governor Cuomo alerted all to this.

.@AGSchneiderman should remove his eyeliner, as pointed out by Cuomo, when he does his commercials!

Trump and Schneiderman have gone head-to-head in the past. Last year, for example, Schneiderman sued Trump for defrauding students of Trump University. While Trump claimed he would win the suit, he settled for $25 million in December.

With Trump now out of New York and in the White House, Schneiderman has ordered Howard Master, a former assistant U.S. attorney, “to focus specifically on issues involving the Trump administration,” according to the Wall Street Journal.

Now, the fate of Trump’s presidency may hinge on how Schneiderman’s office tackles the Manafort investigation. One thing, however, is certain: America should expect Trump tweets disparaging Schneiderman any moment now.