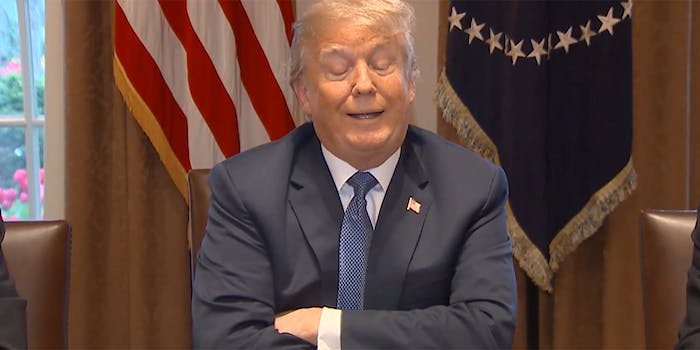 Is he flirting with the idea?

President Donald Trump on Monday addressed the possibility of firing special counsel Robert Mueller, once again railing on the ongoing investigation into Russian collusion during the 2016 presidential election.

In a meeting with military leadership, a reporter asked Trump about Mueller, whose referral led to an FBI raid on Trump’s personal attorney, Michael Cohen, on Monday.

“Why don’t I just fire Mueller?” Trump asked, responding to a reporter’s question. “Well, I think it’s a disgrace what’s going on. We’ll see what happens, but I think it’s really a sad situation … Many people have said, ‘you should fire him.’ Again, they found nothing, and in finding nothing, that’s a big statement.”

He added that Mueller’s team has “the biggest conflicts of interest I have ever seen.”

Trump responds to question "Why don't I just fire Mueller"

"Many people have said you should fire him… we'll see what happens, I think this is disgraceful and so do a lot of other people, this is a pure and simple witch hunt" pic.twitter.com/llJrXhig42

The president has also denied collusion between his campaign and Russia, and on Monday he said that Mueller’s investigation is a “witch hunt.”

Trump’s comments renewed Democrats’ concerns that he will fire Mueller before the probe is finished.

The investigation is critical to the health of our democracy, and must be allowed to continue.