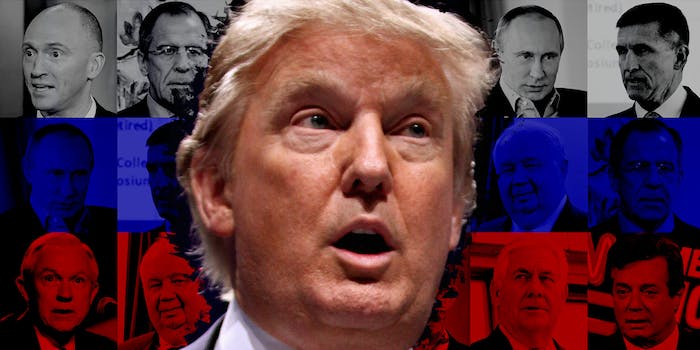 There's a lot to digest, but /r/Keep_Track is keeping it simple.

Let’s face it—the events, issues, and moments surrounding the ever-growing probe into possible ties between Russia and President Donald Trump’s campaign during the 2016 election is a lot to process.

One Reddit community is hoping to make it easier for you.

/r/Keep_Track is an ongoing subreddit that, as the name implies, recaps and summarizes the events leading up to much of what you hear about in the news regarding Trump and Russia on a daily basis.

The subreddit, which was created in late May, is “dedicated to keeping track by organizing and summarizing the different note-worthy developments” surrounding: impeachment talk, Russian interference in the 2016 election, possible collusion between Russia and Trump’s campaign, how Republicans and Trump associates are linked to the investigation and other issues.

As of Monday afternoon,/r/Keep_Track has nearly 15,000 readers.

There is, as you might already know, a lot to tackle in the events surrounding the investigation.

Some of the top threads in the community include a timeline of Comey’s firing and the potential obstruction of justice case, chronologies of major hearings and other topics, and “mega threads” summarizing events that have happened since Trump fired former FBI Director James Comey—sending the various ongoing investigations into overdrive. The group also maintains a wiki on the ongoing investigations.

“This subreddit is NOT a political sub,” r/Keep_Track’s page reads. “There is no room for partisanship, allegiances, rivalries or policies. This is an information subreddit.”

If you’re really looking to dive deep into what is going on, /r/Keep_Track can help. Several threads focus on timelines of some of the major names involved in the investigations including former National Security Adviser Michael Flynn, Trump’s son-in-law Jared Kushner, and others.

For example, the “Flynn Timeline” thread starts in early 2014 when he was fired as director of the Defense Intelligence Agency and goes all the way until late last month when Flynn was ordered to hand over documents relating to Russia by the House Intelligence Committee.

The efforts of /r/Keep_Track seem to be appreciated – two days ago, one Reddit user called the subreddit “patriotic as fuck” and thanked them for doing “what so many of us can’t”—keep track of whatever the heck is going on right now.