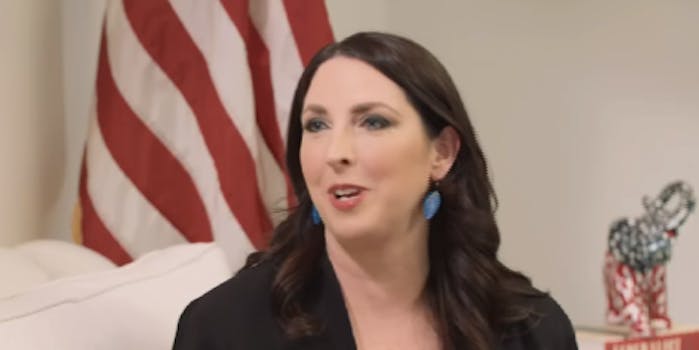 It’s no great secret that President Donald Trump’s relationship with former Republican presidential nominee Mitt Romney is about as sour as it gets. According to a report from the Washington Post, it sounds like the disdain has brought some collateral damage.

After winning the 2016 presidential election last November, Trump reportedly asked Ronna Romney McDaniel, the niece of the former Massachusetts governor who was taking over the job of Republican National Committee chairman from Reince Priebus, to stop using her middle name.

She clearly complied, as in a relatively quick fashion, for all public purposes, she was going by the name Ronna McDaniel, the apparently offending middle name having been excised. During the presidential transition, Trump openly considered―or at least publicly portrayed himself as considering―naming the elder Romney as his secretary of state, dining with him at a fancy French restaurant at the end of November.

But apparently, less than one month later, Trump’s distaste for the man he once endorsed was so strong that he didn’t want the name anywhere near him, not even sandwiched between “Ronna” and “McDaniel.” His conversation asking McDaniel to ditch her middle name reportedly took place in early 2017, prior to her officially taking over as RNC chair.

Now, Trump is reportedly trying to convince 83-year-old Utah Sen. Orrin Hatch, a Republican, to run for another term in order to block Romney from trying to take his seat. Romney, 70, has never served as a senator, having failed in his sole bid against Ted Kennedy in Massachusetts in 1994. He’s widely rumored to be considering a run if Hatch retires, and he’d be an overwhelming favorite to win the seat if so; Utah is a solidly Republican state, and Romney, a devout Mormon, remains very popular there.