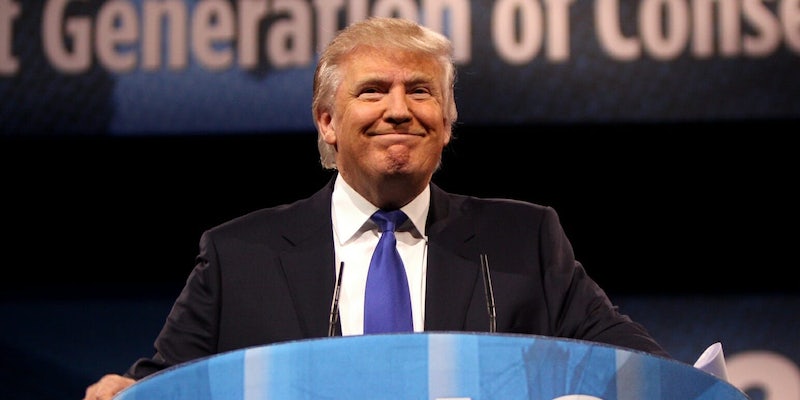 Trump previously denied all knowledge of the payment.

The disclosure came as part of the president’s annual financial report made Tuesday to the Office of Government Ethics, who reviewed and publicly released the file on Wednesday.

“In 2016, expenses were incurred by one of the Donald J. Trump’s attorneys, Michael Cohen,” the form reads. “Mr. Cohen sought reimbursement of those expenses and Mr. Trump fully reimbursed Mr. Cohen in 2017. The category of value would be $100,001-$250,000 and the interest rate would be zero.”

Trump said that he was releasing the form “in the interest of transparency,” but the ethics office said that the submission was a requirement.

“The information related to the payment made by Mr. Cohen is required to be reported,” officials wrote on the document. “The information provided meets the disclosure requirement for a reportable liability.”

Details of the payment were first revealed two weeks ago by White House lawyer Rudy Giuliani, who appeared to let the information slip during an interview on Fox News.

Before then, Trump had previously denied knowledge of any such payment. After Giuliani’s comment, the president admitted that Cohen had paid Daniels as part of an agreement and denied the affair allegations but reasoned that such payoffs are “very common among celebrities and people of wealth.”

The revelation that Cohen’s payment to Daniels was real raised some questions about violation of campaign expenditure rules.

Trump’s financial submission also gives a look at just at how much his business empire generates for him. According to the report, Trump’s Mar-a-Lago resort in Florida made over $25 million in 2017, and income from the Trump International Hotel in Washington, D.C. has doubled since 2016 to over $40 million.