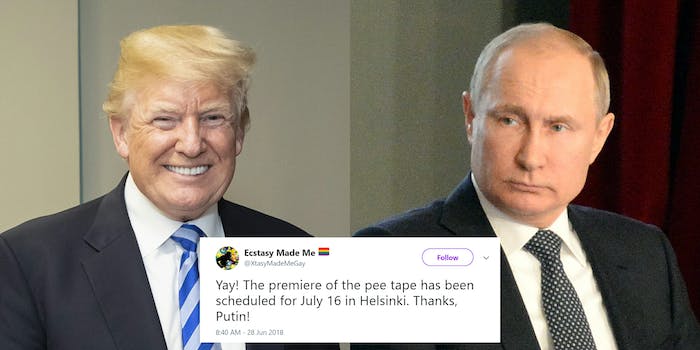 The meeting between the two leaders is set for July.

The two have met before, at the G20 summit last year, but this will be the first extended meeting, and they will reportedly discuss a “range of national security issues.” In advance of the announcement, the president used his morning tweetstorm to tell people that Russia said the country was not involved in in the 2016 U.S. presidential election.

Russia continues to say they had nothing to do with Meddling in our Election! Where is the DNC Server, and why didn’t Shady James Comey and the now disgraced FBI agents take and closely examine it? Why isn’t Hillary/Russia being looked at? So many questions, so much corruption!

The widely accepted consensus among U.S. intelligence agencies is that Russia engaged in a disinformation campaign to sway American voters.

While Secretary of State Mike Pompeo said that Russia engaging in election interference would be on Trump’s agenda during the summit, the president, when asked in the Oval Office yesterday, said that you “never know” what happens in meetings.

In the Oval Office yesterday I asked Pres Trump if Russia's election meddling would be on his agenda for his meeting with Putin.

His answer: "You never know about meetings, what happens. Right? But I think a lot of good things can come with meetings with people." https://t.co/MlUYznSS8C

As news of the summit broke, and with the nearly simultaneous and curiously timed proclamation by Trump that Russia did not mettle in the election, Twitter had one question: Would Trump and Putin talk about the compromising information that possibly exists of the president.

You know, the pee tape?

Yay! The premiere of the pee tape has been scheduled for July 16 in Helsinki. Thanks, Putin! pic.twitter.com/r3RUnyJ0g5

Pee Tape to be released the same day. https://t.co/BjLb7w1KSH

More like to discuss the status of the pee tape

This summit will confirm the pee tape is real and that Putin personally owns Trump who will bend the knee in front of the entire world.

Literally every news organization that tweeted about the summit got a pee tape tweet in response. What a world.