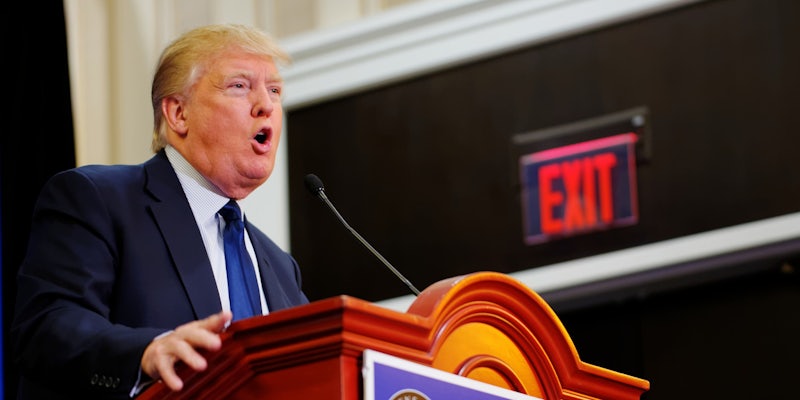 The wide-ranging press conference was overshadowed by conflict.

Originally scheduled to address Trump’s business interests and concerns over conflicts of interest, the press conference began with a strong condemnation of reports on a set of unverified documents alleging that Russia’s government compromised Trump.

“It’s frankly outrageous and highly irresponsible for a left-wing blog that was openly hostile to the president-elect’s campaign to drop highly salacious and flat-out false information on the internet just days before he takes the oath of office,” Sean Spicer, Trump’s incoming press secretary, said of BuzzFeed and its decision to publish the documents in full on Tuesday evening while noting that they are unverified. CNN also reported on the documents but did not publish them.

“The fact that BuzzFeed and CNN made the decision to run with this unsubstantiated claim is a sad and pathetic attempt to get clicks,” Spicer said.

The documents, which Trump has repeatedly condemned as fake news, set the tone for the rest of the wide-ranging event. Here are the six big takeaways.

1) Trump thanks members of the media who cast doubt on the validity of the Russia ‘blackmail’ documents.

Trump has long had a contentious relationship with the press, which he frequently refers to as the “dishonest media.” And while Trump condemned BuzzFeed and CNN for their reports on the documents, he thanked members of the media who chose to question their validity. “I have great respect for the press and the news,” Trump said, adding that outlets that decided to not publish the documents were “so incredibly professional that I’ve just gone up a notch in what I think of you.”

Trump later refused to answer a question from CNN reporter Jim Acosta, saying, “You are fake news!” He also called BuzzFeed a “failing pile of garbage.”

2) Trump further details why the documents are fake

The documents include unsubstantiated allegations that Trump engaged in depraved sex acts with prostitutes in a Moscow hotel—a wild claim Trump refuted by asserting that he takes precautions when traveling and, further, is “very much of a germaphobe.” He added that he has warned members of his team that there could be hidden cameras in their hotel rooms when traveling abroad.

Trump later failed to answer a reporter’s question about whether any members of his team had contact with the Russian government over the course of the 2016 election season.

3) Trump backs reports of Russian hacking while pointing fingers at other countries.

Contrasting with his previous statements, Trump pointedly said “I think it was Russia” that hacked the Democratic National Committee in the lead-up to November’s election. However, Trump also condemned the DNC as being “totally open to be hacked.” Trump asserted that the Republican National Committee avoided the same fate by having a “very, very strong hacking defense.”

Trump also downplayed evidence of Russia’s tampering in the U.S. election by pointing out that China is believed to have hacked the Office of Personnel Management, which led to the theft of sensitive records on some 22 million past and current U.S. government employees.

Further, Trump called on Russian President Vladimir Putin to stop orchestrating cyberattacks against the U.S. “He shouldn’t be doing it. he won’t be doing it,” Trump said of Putin. “Russia will have much greater respect for our country when I’m leading it than when other people were leading it.”

4) Trump says he turned down a $2 billion deal

Trump claimed that he recently turned down a $2 billion real estate deal in Dubai to avoid the perception that he has conflicts of interest. “I was offered $2 billion to do a… number of deals. I turned it down. I didn’t have to turn it down,” Trump said while citing that conflict-of-interest laws don’t apply to the president of the United States. “So, I could actually run my business and run government at the same time,” he added. “I don’t like the way that looks, but I could do that.”

Trump repeated his claim that he has no current business deals in Russia. “I have no deals, I have no loans, and I have no dealings,” Trump said, “… and no current pending deals.” Asked by a reporter about whether he would release his tax returns to prove this, Trump downplayed their importance and repeated, incorrectly, that he could not release his tax returns because he is currently under audit by the IRS.

“I’m not releasing the tax returns because as you know they’re under audit,” Trump said. He added to laughs from the audience, “The only ones who care about my tax returns are reporters.”

6) Trump hands his business over to his sons

The attorney also said that the Trump Organization will not enter into any new deals with foreign governments while Trump is president, and the president-elect will only learn of new domestic deals from “the news.”

Further Trump’s team will establish a trust to hold Trump’s assets, which the attorney said he would keep, as selling them would create more problems. Ivanka Trump, the president-elect’s daughter, will also remove herself from the Trump Organization’s business dealings. Her husband, Jared Kushner, will serve as a White House adviser to Trump.

Finally, Trump’s hotels and other businesses will donate all profits gained through business with foreign governments—like renting hotel rooms to foreign dignitaries—to the U.S. Treasury department, the attorney said.