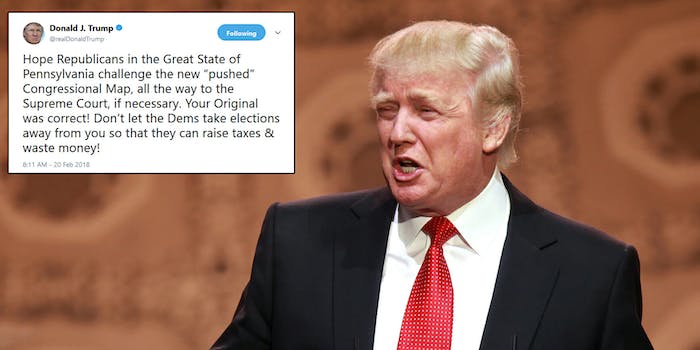 Trump comes out in favor of gerrymandering

The new maps were released on Monday.

The maps, which were drawn to replace old-gerrymandered maps made by Republicans in 2011, were released on Monday by the Pennsylvania Supreme Court.

The state Supreme Court ruled in January that the old Republican-drawn maps were illegal and needed to be redrawn.

The new maps erased the gerrymandered districts, which were ruled to unfairly favor Republicans, and attempt to more equitably distribute votes across the state.

Trump seems to agree with the idea that the maps would break Republican strongholds in the state and appeared to endorse gerrymandering.

On Tuesday morning he urged Republicans in the state to take the new map to the U.S. Supreme Court “if necessary.”

Hope Republicans in the Great State of Pennsylvania challenge the new “pushed” Congressional Map, all the way to the Supreme Court, if necessary. Your Original was correct! Don’t let the Dems take elections away from you so that they can raise taxes & waste money!

The president added: “Don’t let the Dems take elections away from you so that they can raise taxes & waste money!”

Gerrymandering in Congress starts with the drawing of political districts. Each member of the House of Representatives represents a single district and state legislatures are generally in charge of drawing the boundaries of congressional districts, which can be manipulated by political parties to maintain their representation in Congress.

The new Pennsylvania maps are almost certain to factor into the midterm elections later this year–likely the reason for the president’s out-of-nowhere tweet on Tuesday.

The maps, which were issued by the Pennsylvania Supreme Court after Democrats and Republicans could not come to an agreement on new maps, were ordered to be compact and have nearly equal populations.

Here's the PA congressional map that's been in place since 2011 (left) and the new one (right) pic.twitter.com/hdjk0Qx8Bg

Republicans in the state have vowed to challenge the new map in court.

If it does get to the U.S. Supreme Court as Trump apparently hopes, it would be the second time it has weighed in on Pennsylvania’s maps. Earlier this month the Supreme Court rejected a request from Republicans to halt the state Supreme Court’s order to redraw the districts.

The Supreme Court is already planning to rule on gerrymandering cases in Wisconsin and Maryland.

You can read more about the state’s new congressional district map here.