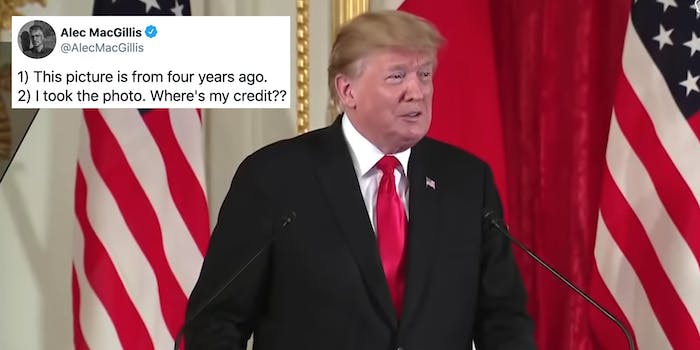 Trump seemingly tries to pass off 4-year-old photo as new, gets called out by photographer who took it

He praised the photo and thanked MAGA supporters.

President Donald Trump was roasted on Twitter Saturday after praising a 4-year-old photo showing a yard filled with his campaign signs.

Ahead of his campaign rally in Nevada, Trump began thanking his supporters while tweeting out numerous pictures of flags and signs adorned with his name.

But one of his tweets, which was shared nearly 25,000 times, included a photograph that was actually from 2016.

In fact, the person who took the photo, ProPublica journalist Alec MacGillis, called out the president not long after.

“Here it is, March 2016,” MacGillis said while referencing the original picture. “You’re living in the past, @realDonaldTrump.”

“Mr. President, thanks for taking advantage of @ProPublica’s Creative Commons policy, which lets anyone republish our content for free,” the media company said. “However, you should note this photo is not new, but from 2016 and, per our policy, you should’ve credited @AlecMacGillis as photographer.”

Numerous other Twitter users recognized the old photograph as well.

“This is a @propublica photo, taken in 2016, which Trump is tweeting this weekend for some reason,” @brianklaas added.

The photo’s age wasn’t the only thing noticed by Twitter users. Many also argued that the photo symbolically resembled a gravesite filled with those killed by the president’s poor response to the coronavirus pandemic.

“Am I the only one who looks at this and sees tombstones?” @MilesTaylorUSA asked. “Except the @realDonaldTrump graveyard has about 189,000 more, and growing.”

Ironically enough, MacGillis, the journalist who took the photograph, also described the scene similarly in a 2016 article.

“I was looking for a professional sign-maker who had turned his West Carrollton ranch house into a distribution point for Trump yard signs, in high demand just days prior to the Ohio Republican primary,” MacGillis wrote. “Instead of piling the signs in the driveway, he had arrayed them in his yard along the road. There they were, dozens and dozens of them, lined up in rows like the uniform gravestones in a military cemetery.”

Despite the embarrassing photo, the president has seemngly declined to remove the tweet.