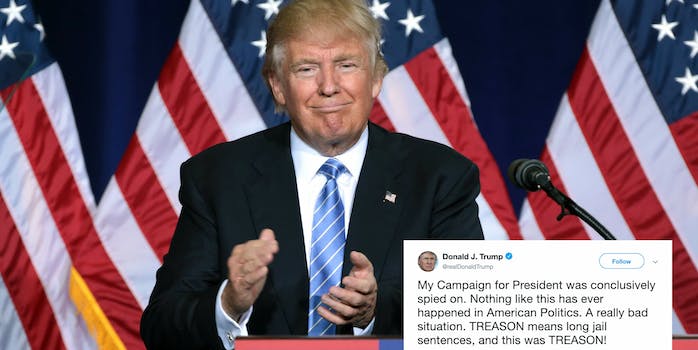 President Donald Trump, ever since he burst onto the presidential campaign stage, has flirted with the idea of jailing his opponents. Throughout his race against Hillary Clinton in 2016, he gleefully led cheers at his rallies to “lock her up.”

Today, though, he just about called for everyone who opposed him to be thrown in prison. You know, normal stuff.

Again insisting that his campaign had been spied on, Trump called for “long jail sentences” for the people involved in what he’s deemed Spygate—the long-running theory that his campaign was illegally surveilled by the highest levels of the FBI in order to prevent him from winning the 2016 election. He twice called the alleged spying “TREASON” in all caps.

My Campaign for President was conclusively spied on. Nothing like this has ever happened in American Politics. A really bad situation. TREASON means long jail sentences, and this was TREASON!

Trump has long insisted then-President Barack Obama was behind the spying, so he is essentially demanding that he go to prison.

It seems Trump has gone full QAnon this morning.