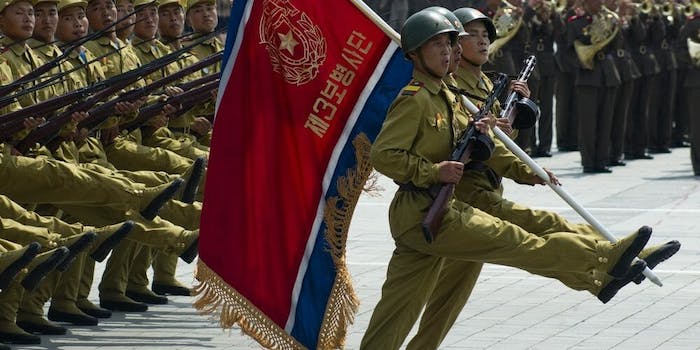 Trump had a strange take on the test.

North Korea claimed on Tuesday that it has successfully tested an intercontinental ballistic missile, a milestone step in as it works toward a nuclear weapon capable of reaching the United States.

“The success in the test-fire of intercontinental ballistic rocket Hwasong-14 is a powerful manifestation of the invincible state might and the tremendous capability of the self-reliant national defense industry of the [Democratic People’s Republic of Korea],” North Korean state-media wrote, using the nation’s full name, according to Chinese news outlets.

U.S. Pacific Command said that it had tracked the “single launch of a land-based, intermediate range ballistic missile” that launched from a location north of the North Korean capital Pyongyang. The missile then landed in the ocean, inside Japan’s exclusive economic zone.

South Korea’s President Moon Jae-in issued a statement that his administration was aware of the launch, the fourth since he took office in May, and that officials were analyzing what was known.

President Donald Trump then responded to the incident via Twitter, asking of the North’s dictator Kim Jong-Il: “North Korea has just launched another missile. Does this guy have anything better to do with his life?”

North Korea has just launched another missile. Does this guy have anything better to do with his life? Hard to believe that South Korea…..

….and Japan will put up with this much longer. Perhaps China will put a heavy move on North Korea and end this nonsense once and for all!

While President Moon has pledged to renew efforts to open dialogue with the North’s regime, Trump tweeted that it was up to the country’s only local ally, China, to step in.

China’s Foreign Ministry issued a statement criticizing the missile test but defended its recent efforts to encourage the regime to curb its testing.

In April, Trump and Chinese President Xi Jinping met at the private Mar-a-Lago resort in Florida to discuss the “North Korean problem.” At the time, China and South Korea both agreed that tougher sanctions on their poverty-stricken neighbor were necessary.

Tensions over North Korea’s nuclear and ballistic missile program have been a staple of American foreign policy conversation for years, but they were renewed following Trump April intervention in Syria. With the state’s new progress, the conversation may come to dominate the upcoming G20 summit in Germany this week, where Trump will meet with world leaders from 20 other countries.