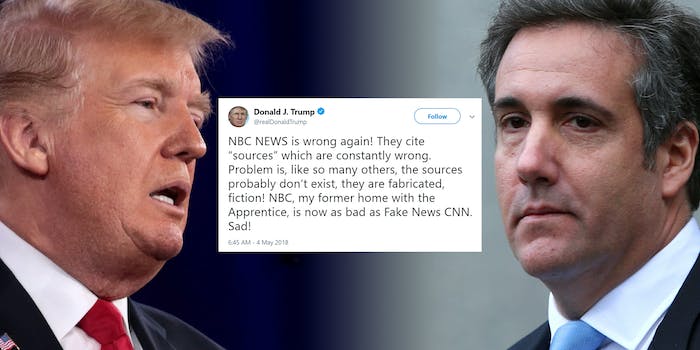 NBC gave Trump another victory in his war against the media

President Donald Trump unleashed on NBC News this morning, after the website corrected a story last night, softening what was originally a jarring scoop.

“NBC NEWS is wrong again!” Trump wrote. “They cite ‘sources’ which are constantly wrong. Problem is, like so many others, the sources probably don’t exist, they are fabricated, fiction! NBC, my former home with the Apprentice, is now as bad as Fake News CNN. Sad!”

NBC NEWS is wrong again! They cite “sources” which are constantly wrong. Problem is, like so many others, the sources probably don’t exist, they are fabricated, fiction! NBC, my former home with the Apprentice, is now as bad as Fake News CNN. Sad!

Yesterday afternoon, NBC dropped a bombshell: that authorities had wiretapped the phone of Trump’s personal lawyer, Michael Cohen, to listen in on his calls, including at least one with the White House. The report ricocheted around the web (and was written about by the Daily Dot).

However, Trump’s new lawyer, Rudy Giuliani, immediately called into question that report while speaking with the Daily Beast.

“We think it’s going to turn out to be untrue because it would be totally illegal. You can’t wiretap a lawyer, you certainly can’t wiretap his client who’s not involved in the investigation.”

Not more than an hour later, NBC amended the original report, saying that the government had used a much less invasive tactic to monitor Trump’s calls: a “pen register,” which is merely a log of calls Cohen made.

Trump has previously denied NBC stories on Twitter. When the network reported he wanted a “tenfold” increase in America’s nuclear arsenal, he called it fiction.

Fake @NBCNews made up a story that I wanted a "tenfold" increase in our U.S. nuclear arsenal. Pure fiction, made up to demean. NBC = CNN!

When NBC reported former Secretary of State Rex Tillerson called Trump a “moron” and threatened to resign, the president denied that too—at least in part.

Rex Tillerson never threatened to resign. This is Fake News put out by @NBCNews. Low news and reporting standards. No verification from me.

Tillerson did deny he was planning on resigning but did not deny the language about Trump.

Trump has repeatedly railed against the media, saying outlets make up stories to make him look bad.

But Trump’s rallying cry of “fake news” is frequently proven to be false. Tillerson did wind up leaving the administration. Just two months ago, Trump tweeted in response to a New York Times piece about his legal team being in disarray, saying he was “VERY happy with … John Dowd, Ty Cobb and Jay Sekulow.”

…have shown conclusively that there was no Collusion with Russia..just excuse for losing. The only Collusion was that done by the DNC, the Democrats and Crooked Hillary. The writer of the story, Maggie Haberman, a Hillary flunky, knows nothing about me and is not given access.

As it turns out, now two of those lawyers are gone, and Trump has an entirely revamped legal team.