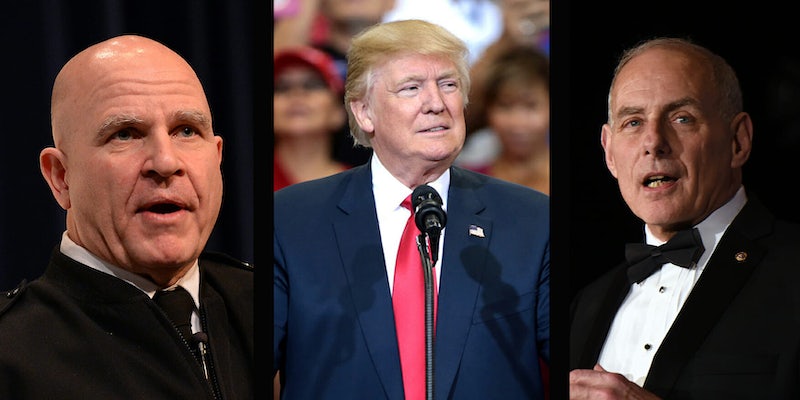 White House denies McMaster, Kelly could be out soon

Things could get ugly quick.

More shakeups could be on the horizon for President Donald Trump‘s administration.

Reports suggest that National Security Adviser H.R. McMaster and Chief of Staff John Kelly could be removed from the White House. If they do, they would become the latest in a long string of high-ranking officials who have left the Trump administration in just over a year since he took office. The latest shakeup occurred earlier this week when Trump announced Secretary of State Rex Tillerson would be replaced by CIA Director Mike Pompeo.

The Washington Post and Wall Street Journal reported that McMaster could be removed from his position by Trump. The president is “now comfortable” with ousting McMaster, according to the Post, but the Journal said the move could be months away.

White House Press Secretary Sarah Huckabee Sanders pushed back against the reports about McMaster, tweeting that he and the president had a “good working relationship.”

“Just spoke to @POTUS and Gen. H.R. McMaster – contrary to reports they have a good working relationship and there are no changes at the NSC,” Sanders wrote.

Just spoke to @POTUS and Gen. H.R. McMaster – contrary to reports they have a good working relationship and there are no changes at the NSC.

Possibilities to take over for McMaster include John Bolton, a Fox News contributor and former ambassador to the United Nations, and Keith Kellog, the current chief of staff of the National Security Council, the New York Times reports. Last year McMaster reportedly called Trump an “idiot” and a “dope” when speaking at a private dinner.

Meanwhile, sources told CBS News that Kelly, who has been known to vex the president from time to time, could also be on the way out of the administration. Sources told the news outlet that Kelly could resign as early as today.

However, a new report says Kelly and Trump reached a detente yesterday, and that the former general is all in.

NEWS from @MichaelCBender: Trump and Kelly have reached a truce. After a productive meeting yesterday, Trump told advisers Kelly was “100% safe,” and Kelly told aides: “I’m in.” https://t.co/H9p0GYyXPZ

All of the shakeups in the White House could be exactly what Trump wants, judging by comments he made yesterday.

“There will always be change. I think you want to see change,” Trump said on Thursday. “I want to also see different ideas.”