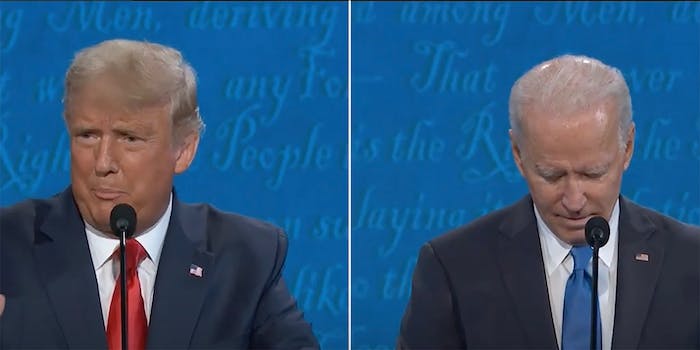 President Donald Trump described undocumented immigrants that return for court hearings as “those with the lowest IQ” in Thursday’s presidential debate.

The two nominees argued about immigration in the final presidential debate before Election Day. Moderator Kristen Welker began by noting a new story, that there are currently 545 children whose parents the United States cannot find after they were separated in the Trump administration’s anti-immigration actions.

Trump defended his immigration policy by claiming undocumented immigrants do not come back for trial once in the U.S., criticizing a policy under the Obama administration known as catch-and-release.

“Less than 1% of the people come back. We have to send ICE out and border patrol out to find them,” Trump said. “When you say they come back, they don’t come back, Joe, they never come back. Only the really—I hate to say this—but those with the lowest IQ, they might come back.”

According to a New York Times report, an estimated 5,500 children have been separated from their parents at the border under the Trump administraion’s policy. Videos from immigration detention facilities in Texas show children in cages as a result of the no-tolerance policy.

However, Trump described the conditions at the border differently in his debate remarks.

“They are so well taken care of. They are in facilities that are so clean,” he said.

“having a hard time squaring how the ‘least racist person in the room’ *just* made racist comments about the low IQ of #immigrants#Debates2020,” one person tweeted.

Another debate watcher tweeted, “Did Trump actually say only low IQ immigrants show up for their immigration hearings? WTF?”

“‘Only those with the lowest IQs would show up’ is one of the most jawdroppinly racist statements I have ever heard in a #PresidentialDebate. Trump called 100% of credible asylum seekers low IQ,” another tweeted.

Trump said his administration was “trying very hard” to reunite separated children with their parents in his response at the debate.

Yet, in the same response, Trump presented a cynical view of how the separated children came to the U.S.

“Children are brought here by coyotes and lots of bad people, cartels, and they’re brought here and they used to use them to get into our country,” he said.

In the candidates’ back-and-forth, Biden refuted Trump’s claims. Biden noted, of the situation, “It makes us a laughingstock and it violates every notion of who we are as a nation.”