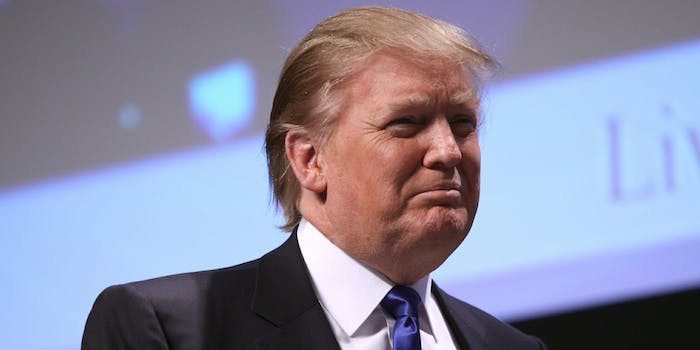 He wants his demands for immigration.

President Donald Trump said he would “love” to see another government shutdown.

Trump said a government shutdown would be agreeable if Democrats did not agree with his demands for immigration. The president made the remarks when speaking with law enforcement and members of Congress on Tuesday afternoon.

“Let’s have a shutdown. We’ll do a shutdown. It’s worth it for our country. I’d love to see a shutdown if we don’t get this stuff taken care of,” Trump said, adding: “If we have to shut it down because the Democrats don’t want safety and, unrelated but still related, they don’t want to take care of our military, then shut it down.”

BREAKING: President Trump on immigration: “If we don’t get rid of these loopholes… let’s have a shutdown, we’ll do a shutdown, and it's worth it for our country. I’d love to see a shutdown if we don’t get this stuff taken care of.” pic.twitter.com/WbCAPUUf5m

The government faces another deadline to pass a spending bill on Thursday.

Trump has proposed a hard line on immigration—including his plan to build a wall on the southern border of the country—in exchange for a plan to address the Deferred Action for Childhood Arrivals (DACA) program, which shields undocumented immigrants who were brought into the country as children from deportation.

The Senate is reportedly working on a budget deal that would keep the government open that would increase spending on defense and also push money into domestic programs, according to AP.

The government shut down for several days last month after lawmakers could not agree on a spending bill. The shutdown ended after Democrats agreed to vote on the short-term bill in exchange for promises from Republicans to discuss DACA.

The president repeatedly blamed the shutdown on Democrats.

Earlier in the day, Trump’s Chief of Staff John Kelly said Trump would not budge on the approaching March 5 DACA deadline.