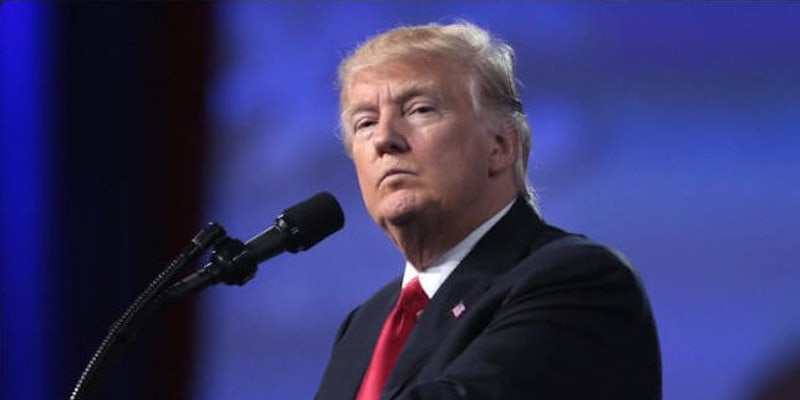 He called for an 'ultimate solution.'

President Donald Trump is being accused of using the language of genocide to refer to the Turkish invasion of Syria, where Turkey is fighting the smaller and relatively ill-equipped Kurdish forces.

In the nearly two weeks since the invasion began, upwards of 200,000 have been displaced, hundreds are dead, and evidence of war crimes has begun to emerge. Mass funerals have become a daily ritual for the Kurds, NowThis reports.

The assault was launched after Trump abruptly announced that U.S. forces would evacuate northern Syria and abandon its Kurdish allies who were instrumental in the defeat of ISIS. The decision has been criticized globally as giving Turkey a green light to invade.

Since his surprising Oct. 6 announcement, Trump has repeatedly attempted to deny culpability for the violence and chaos. Simultaneously, he has oscillated between warning and praising Turkish President Recep Tayyip Erdoğan.

In some of his latest statements about the conflict, which many are characterizing as the beginnings of a genocide of the Kurds, Trump has used language that mirrors that of ethnic cleansing.

In a speech yesterday, he said of Turkey’s invasion of the region and killings of the Kurds, “They had to have it cleaned out.”

In response, Rep. Alexandria Ocasio-Cortez (D-N.Y.) tweeted, “The President of the United States is using the language of ethnic cleansing. If we allow him to continue, who would he use it on next?”

Trump on the Kurds

On Twitter today, he referred to “the ultimate solution” for the region. Though Trump clearly was not suggesting that the Kurds would want to be the victims of a genocide, the language struck a cord.

Many recalled that the Nazis referred to the genocide of the Jews as the “final solution.”

Just spoke to President @RTErdogan of Turkey. He told me there was minor sniper and mortar fire that was quickly eliminated. He very much wants the ceasefire, or pause, to work. Likewise, the Kurds want it, and the ultimate solution, to happen. Too bad there wasn’t…..

Someone should tell Trump that when he refers to the Kurds and the ultimate solution in the same sentence, no one can hear anything he’s saying over the echoes of historical genocide and ethnic cleansing. pic.twitter.com/HzLAq67bOd

Trump goes all in on ethnic cleansing (AKA genocide) of the Kurds he sold out. Beyond shameless—criminal. https://t.co/OytpZ9x3jm

In the last 24 hours Trump has stated that the Kurds, "had to be cleaned out", and referred to the need for the,"Ultimate Solution", to the problem Turkey has with the Kurds. Haven't we heard language like that before somewhere?

Talking of an "ultimate solution," blindly repeating Turkey's longtime characterization of decades of state violence against Kurds as a fight against terrorism…

Trump has assured people that Erdoğan said that “minor sniper and mortar fire […] was quickly eliminated” and “wants the ceasefire, or pause, to work.” His critics say he is being played for a fool on the world stage.

Next week, Erdoğan travels to Russia to discuss Syria with President Vladimir Putin.