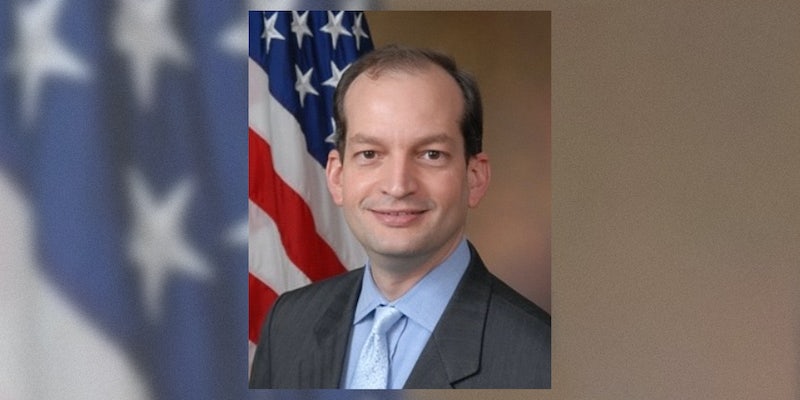 Photo via US DOJ/Wikipedia (Public Domain)

Ahead of his confirmation hearing on Wednesday, President Donald Trump’s labor secretary nominee is facing fresh questions about a plea deal that he helped negotiate for billionaire financier Jeffrey Epstein in 2008.

Epstein was at the center of an enormous child sex abuse case after paying dozens of girls, who were aged between 13 to 17 years old, to participate in illicit sexual activity. Between 1999 and 2005, Epstein had used his private staff to organize the entire prostitution ring from his mansions in Palm Beach, New York, and the Virgin Islands.

Epstein pled guilty to a state charge, but he faced a 53-page federal indictment that could have seen him face a lifetime in prison. Alexander Acosta, Miami’s U.S. attorney at the time, negotiated what lawyers representing the victims disgustedly called a “sweetheart plea deal” that helped Epstein avoid federal court.

Instead, the convicted billionaire registered as a sex offender, served just 13 months in state prison, and agreed to pay damages to his 40 victims. The non-prosecution agreement, signed in secret in late 2007, also granted federal immunity to several of Epstein’s accomplices.

It wasn’t until 2011 that Acosta wrote about the Epstein plea deal and defended his position.

“Some may feel that the prosecution should have been tougher. Evidence that has come to light since 2007 may encourage that view,” he said, claiming that it was “better” to guarantee conviction than lose to Epstein’s “army of legal superstars.”

“I supported that judgment then,” the former attorney continued. “And based on the state of the law as it then stood and the evidence known at that time, I would support that judgment again.”

Acosta, who is Trump’s second labor secretary pick, works as a dean at Florida International University’s law school. Trump’s original nominee was fast food CEO Andrew Puzder. He was forced to withdraw amid controversial information that would have compromised his nomination.