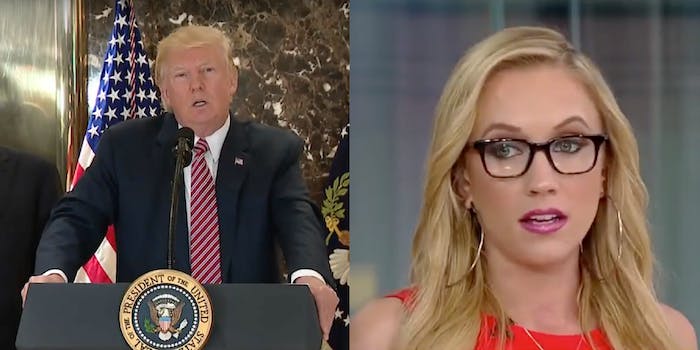 'It was one of the biggest messes I’ve ever seen. I can’t believe it happened.'

Kat Timpf, co-host of The Fox News Specialists, responded to Trump laying blame for violence in Charlottesville, Virginia, over the weekend on the “alt-left” and equivocating white supremacists and neo-Nazis with counterprotesters who opposed their racist views.

“It’s crazy for me to have to comment because I’m still in the phase where I’m wondering if it was actually real life what I just watched,” Timpf said. “It was one of the biggest messes I’ve ever seen. I can’t believe it happened.”

During the press conference, Trump claimed that he waited two days to condemn neo-Nazis and white supremacists by name because he wanted to first “know the facts.” Timpf called this out as disingenuous given Trump’s penchant for reacting to other events, like terrorist attacks. “Because he’s done that before, before he’s had the facts,” Timpf said. “He is not measured in his criticism. He goes after people as soon as he gets the inkling.”

Trump also said there were “very fine people” among both the counterprotesters and the white supremacist demonstrators—an assertion Timpf dismissed as absurd.

“For him to take 48 hours, that is something he has never done before,” Timpf continued. “And, yeah, it shouldn’t be some kind of bold statement to say, ‘Yes, a gathering full of white supremacist Nazis doesn’t have good people in it. Those are all bad people, period.’ And fact that that’s controversial, I don’t know if I should just laugh. I have too much eye makeup on to start crying right now.”