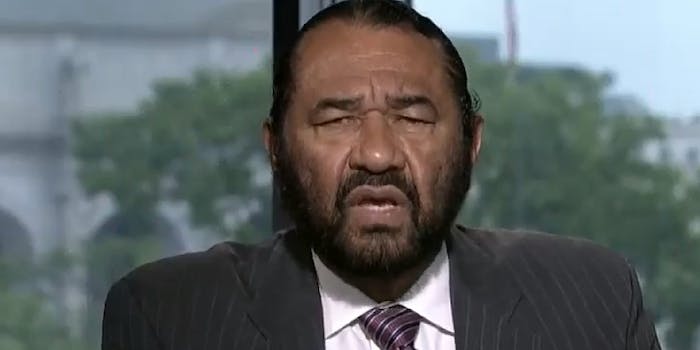 No, this doesn't mean impeachment is close.

Rep. Al Green (D-Texas) recently told C-SPAN that he is drawing up articles of impeachment to begin the process of removing President Donald Trump from office.

But that doesn’t mean it’s close to becoming a reality.

Green insists that Trump is guilty of obstruction of justice after he surprisingly fired former FBI Director James Comey and seemed to threaten or intimidate him on Twitter.

Green said that he has “constitutional scholars” helping him write the articles of impeachment.

If his resolution is not acted upon, Green said he will “take it upon himself” to move forward, adding that he did not have an exact date he intends to file it.

Following Green’s speech on the House floor, he received several calls saying that they would “lynch” and “hang” him.

While Green’s written charges are the first step, several other things would need to occur before it was even a real possibility that Trump would be impeached.

A full impeachment would require a majority vote in the House of Representatives—which is Republican controlled. Then the case would be tried in the Senate, and a two-thirds majority would need to vote to convict and remove the president from office. The Senate is also controlled by Republicans, making this scenario unlikely.

Green said the American people should “weigh in” on the matter of impeachment. Searches for “impeachment” have spiked recently online.

“When the will of the people is properly expressed, the will of Congress will change,” Green said.

You can watch all of Green’s comments on C-SPAN here.