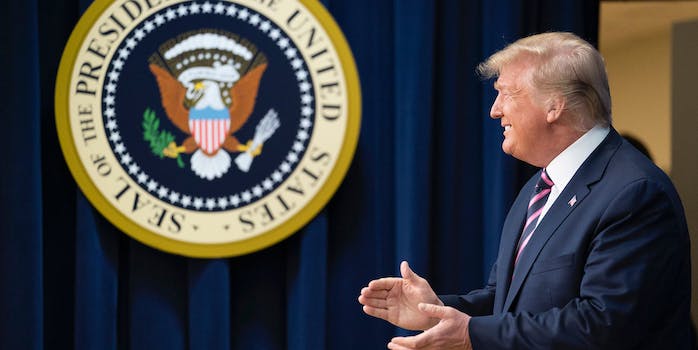 Trump was impeached. Or DUN DUN DUN was he?

You may think that yes, he was, given that the House voted to impeach him Wednesday night. But it’s possibly a no?

The trending-on-Twitter talking point comes from one of the right-wing’s favorite sources of information, internet pundit Mike Cernovich, who in a blog post this week wrote that a constitutional scholar claimed Trump has yet to “technically” be impeached.

Because the House is refusing to send the articles of impeachment over to the Senate, there are questions as to whether the impeachment itself is valid.

He may not be wrong, though.

In an article for Bloomberg published yesterday, constitutional scholar Noah Feldman argued similarly, saying though the impeachment vote occurred, it hadn’t technically been consummated, because the House needed to deliver the articles of impeachment to the Senate after the vote for it to become “official.”

House Speaker Nancy Pelosi (D-Calif.) has not delivered the articles to the Senate yet, saying she is waiting to establish fair protocols for a trial.

It’s a bit of a chicken-and-the-egg thing. Here’s what Feldman says.

[An] indefinite delay would pose a serious problem. Impeachment as contemplated by the Constitution does not consist merely of the vote by the House, but of the process of sending the articles to the Senate for trial. Both parts are necessary to make an impeachment under the Constitution: The House must actually send the articles and send managers to the Senate to prosecute the impeachment. And the Senate must actually hold a trial.

If the House does not communicate its impeachment to the Senate, it hasn’t actually impeached the president.

Because Feldman testified for the Democrats, his argument exploded around some conservative media sites, declaring that (maybe) Trump hasn’t really been impeached.

The argument made it all the way to Fox News.

It’s unclear if Pelosi will deliver the articles to the Senate (it seems likely she will), as they debate what the proper protocols for a trial will be.

It’s possible that Trump hasn’t been literally impeached by the very direct letter of one interpretation of the Constitution, but there is no doubt that the lawmakers voted to impeach Trump and they can pass along the articles whenever they want.

If they don’t, then this ontological debate can really begin.