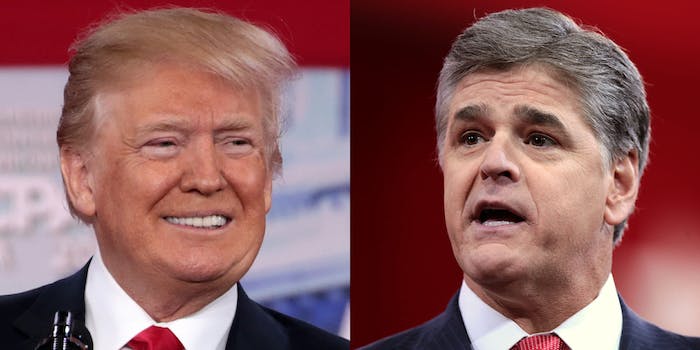 The president and the Fox News host are closer than ever.

Most weeknights, President Donald Trump is decompressing with one of his favorite people. They catch up, talk about their days, discuss some of the difficult decisions the president has to make. It’s not Ivanka and it’s not his wife, Melania.

According to a New York Magazine report, Hannity is one of a few dozen people outside the administration authorized to contact the president through the White House switchboard. And he does so often—sometimes several times a day.

But Hannity’s almost always on the phone with the president after his 9:00pm show, Hannity, wraps on weeknights, according to the report.

Former White House staffers Reince Priebus and Sean Spicer steered Trump toward Hannity after the president’s early-morning tweets about Morning Joe and New Day became too much to handle.

“It got to the point that they were just like, ‘We need to get him off these channels and onto Fox & Friends or else we’re going to be chasing down this crazy-train bullshit from MSNBC and CNN all day,’ ” said one unnamed White House official.

The report comes after speculation that Hannity operates as a kind of shadow chief of staff. The Washington Post reported last month that the two talk about ideas for Hannity’s show, what the president should tweet, and Trump’s frustration with special counsel Robert Mueller’s probe into Russian meddling in the 2016 election.

Hannity’s growing closeness to the president was illuminated last month, when it was revealed in federal court that the two men share an attorney, Michael Cohen. While Hannity has stated that he has only sought Cohen’s legal advice as a friend, it further entwines him in a sordid political scandal that involves Russian oligarchs, adult film stars and hush money.

Hannity’s relationship with the president further envelops Trump in a world of his own, creating a feedback loop between the Fox News universe and the president. According to the New York Magazine report,

“Regardless of the news of the day, the overarching narrative of the show is the political persecution of Trump, and by extension of Hannity and Hannity’s viewers, at the hands of the so-called deep state and the Democratic Party, and the corrupt mainstream media, a wholly owned subsidiary of both. “