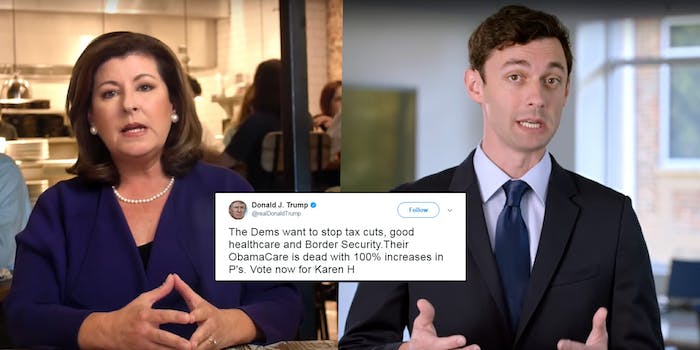 As the closely-watched election for Georgia’s 6th Congressional District gets closer, President Donald Trump has weighed in—urging his Twitter following to vote for Republican Karen Handel.

Some in the Democratic Party see the race as an opportunity to not only seize a seat in the House of Representatives that has been held by Republicans for decades but also as a barometer for the 2018 midterm elections.

The race is expected to be decided by a razor-thin margin as Handel works against Democratic challenger Jon Ossoff.

It appears that Ossoff’s surging in recent months has caught the attention of Trump.

“The Dems want to stop tax cuts, good healthcare and Border Security,” Trump wrote on Monday morning. “Their ObamaCare is dead with 100% increases in P’s. Vote now for Karen H.”

Handel, who was Georgia’s secretary of state, and Ossoff, a political newcomer, are hoping to take the place of Tom Price, whom Trump chose as his cabinet’s secretary of Health and Human Services.

The race has caught the eye of both parties—and is the most expensive House of Representatives election in history.

Early voting has surged in the race, according to reports.

The Atlanta Journal-Constitution reports that more than 140,300 people have cast their ballots early for the special election, a 150 percent increase over those who voted early ahead of the special election took place on April 18 and triggered Tuesday’s election.

“It is unprecedented for this type of election to see this voter turnout for early voting,” Richard Barron, the director of registration and elections in Fulton County, told the newspaper.

Recent polls suggest the race will be incredibly close. A poll conducted by Landmark Communications has Ossoff leading Handel 50 to 48 percent, with a 3.5 percent margin of error.