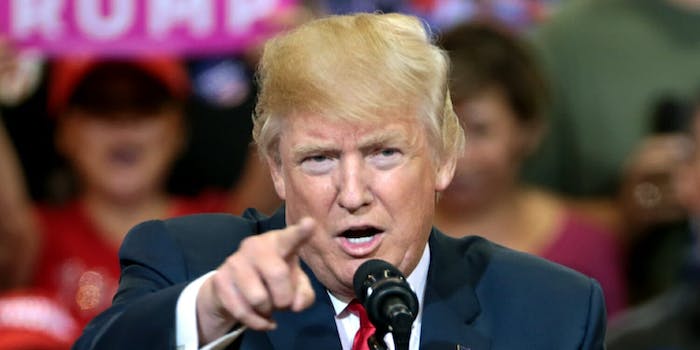 It's getting heated in Florida.

President Donald Trump on Friday said that Democrats were engaged in widespread voter fraud in order to steal the Senate election from Republicans.

In an eight-tweet rant published on Friday, the president alleged foul play, pointing to the tight Senate race in Florida between the incumbent Democrat Bill Nelson and his Republican rival Gov. Rick Scott.

Scott on Sunday echoed the claim on Fox News, saying that Nelson was “clearly trying to commit fraud to win this election” as the two deal with a recount. Nelson filed a lawsuit last week against Florida Secretary of State Ken Detzner, alleging that mail ballots are being unfairly discounted and subject to a “standardless, inconsistent, and unreliable signature matching process.”

You mean they are just now finding votes in Florida and Georgia – but the Election was on Tuesday? Let’s blame the Russians and demand an immediate apology from President Putin!

On Thursday night Scott told a press conference that “the people of Florida deserve fairness and transparency and the supervisors are failing to give it to us.”

“Every Floridian should be concerned there may be rampant voter fraud in Palm Beach and Broward counties,” he said. “I will not sit idly by while unethical liberals try to steal this election from the great people of Florida.”

Trump then tweeted Thursday evening claiming that law enforcement was investigating a “big corruption scandal” in the state and asserting that Florida had voted for Scott.

Law Enforcement is looking into another big corruption scandal having to do with Election Fraud in #Broward and Palm Beach. Florida voted for Rick Scott!

The Florida Department of Law Enforcement actually denied that it was investigating. Still, Trump continued to push the conspiracy on Friday, via Twitter and to reporters outside the White House.

“They’re finding votes out of nowhere, and Rick Scott who won by—it was close, but he won by a comfortable margin, he easily won but every hour it seems to be going down,” the president said. “I think that people have to look at it very, very cautiously.”

On Friday morning the gap between the two candidates narrowed to 0.18 percent as votes in Democrat-leaning Broward County were counted, Nelson still trailing.

What appears to be happening is that votes are still being counted as the likes of mail ballots come in and the delay in a final count is fairly typical. Crucially though, Florida law dictates that any vote with a margin less than 0.5 percent requires a mandatory recount.

Thinking back to 2016, however, it’s not unlike Trump to call voter fraud when he believes a count is going his way. Scott is just playing the president’s song, and the president is more than happy to sing along.