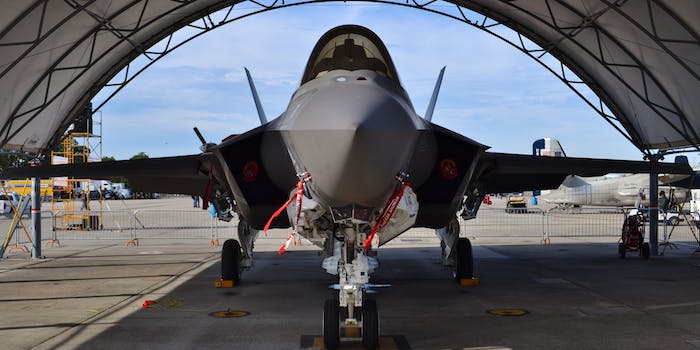 Trump's tweets sink stocks for second week in a row.

President-elect Donald Trump has again sunk the stock price of an aircraft manufacturer with a single tweet.

On Monday morning, Trump tweeted that the cost of the F-35 Joint Strike Fighter program “is out of control.” The tweet, posted just 34 minutes before trading began at the New York Stock Exchange, sent the stock price of F-35 manufacturer Lockheed Martin plummeting.

The F-35 program and cost is out of control. Billions of dollars can and will be saved on military (and other) purchases after January 20th.

CNBC reports that Lockheed Martin’s market value fell $4 billion when markets opened in the U.S. on Monday. The stock prices of other defense contractors, including Boeing, General Dynamics, and several defense-focused portfolios, also fell. Lockheed stock remained down over 4 percent as of 10:45am ET.

Trump’s F-35 tweet comes exactly—almost to the minute—one week after the president-elect tweeted that Boeing’s work on the next-generation Air Force One presidential planes was costing taxpayers $4 billion, which he also deemed “out of control.” The $4 billion is speculative but is believed to be in line with expected total costs for the planes, including Boeing’s current $170 million contract for research and development, as well as construction and purchase of the aircraft.

Unlike the new Air Force One aircraft, which are still in their early stages, the F-35 JSF program has cost hundreds of millions of dollars more than was originally expected. The Defense Department is on track to spend $400 billion for 2,457 planes—twice the initial cost estimate—due in part to ongoing troubles with the fighter aircraft.

The entire cost of the F-35 JSF program is expected to exceed $1.5 trillion, more than any other weapons system in U.S. military history.

Lockheed Martin claims it has already cut costs to the program.

“Since the beginning, we have invested hundreds of millions of dollars to reduce the price of the airplane by about 70 percent since its original costing, and we project it to be about $85 million in the 2019 or 2020 time frame,” Jeff Babione, head of Lockheed Martin’s F-35 program, told Reuters.

Trump lamented the cost and problems with the F-35 JSF early in his presidential campaign, sparking speculation that he would eliminate or cut back the program as president.

“They’re saying it doesn’t perform as well as our existing equipment, which is much less expensive. So when I hear that, immediately I say we have to do something, because you know, they’re spending billions,” Trump told radio host Hugh Hewitt in October 2015.

“This is a plane. There’s never been anything like it in terms of cost,” Trump added. “And how about, you know, we’re retooling with planes that aren’t as good as the ones we have, and the test pilots are amazing people. They know better than anybody, OK, and I think you would accept that.”