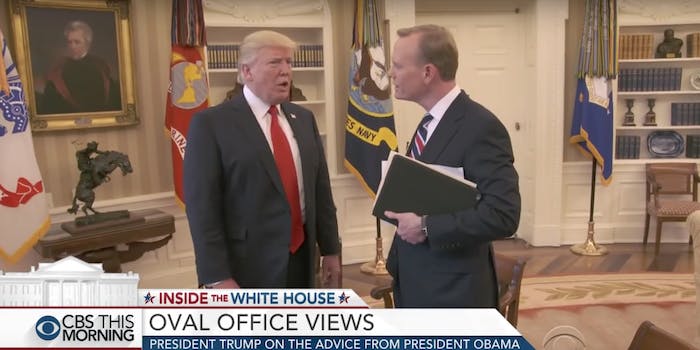 'I don't stand by anything. I just—you can take it the way you want.'

President Donald Trump on Sunday suddenly ended an interview with the host of CBS’s Face the Nation after being asked whether he stood by his unproven claim that former President Barack Obama wiretapped Trump Tower during the 2016 presidential campaign.

Trump raised the issue of surveillance during the interview with Chris Dickerson, which aired Monday on CBS This Morning, saying, “everybody saw what happened with surveillance.” Dickerson pressed Trump, asking what he meant. Trump responded by implying that his claims about Obama surveilling his campaign were his “own opinions.” Pressed further, Trump ended the interview.

To date, neither the White House, members of Congress, nor law enforcement or intelligence services have presented evidence that Obama or anyone in the federal government wiretapped Trump Tower, as Trump claimed in an infamous March 4 Twitter rant. In fact, senators, U.S. representatives, and FBI Director James Comey have denied having information to support Trump’s claim.

Here’s the transcript of the full exchange, via CBS:

JOHN DICKERSON: Did President Obama give you any advice that was helpful? That you think, wow, he really was—

PRESIDENT DONALD TRUMP: — and I thought that—well, you saw what happened with surveillance. And I think that was inappropriate, but that’s the way—

JOHN DICKERSON: What does that mean, sir?

PRESIDENT DONALD TRUMP: You can figure that out yourself.

JOHN DICKERSON: Well, I—the reason I ask is you said he was—you called him “sick and bad.”

PRESIDENT DONALD TRUMP: Look, you can figure it out yourself. He was very nice to me with words, but—and when I was with him—but after that, there has been no relationship.

JOHN DICKERSON: But you stand by that claim about him?

PRESIDENT DONALD TRUMP: I don’t stand by anything. I just—you can take it the way you want. I think our side’s been proven very strongly. And everybody’s talking about it. And frankly it should be discussed. I think that is a very big surveillance of our citizens. I think it’s a very big topic. And it’s a topic that should be number one. And we should find out what the hell is going on.

JOHN DICKERSON: I just wanted to find out, though. You’re—you’re the president of the United States. You said he was “sick and bad” because he had tapped you– I’m just–

JOHN DICKERSON: But I’m asking you. Because you don’t want it to be…

JOHN DICKERSON: …fake news. I want to hear it from…

PRESIDENT DONALD TRUMP: You don’t have to…

PRESIDENT DONALD TRUMP: …ask me.  You don’t have to ask me.

JOHN DICKERSON: Why not?

JOHN DICKERSON: But I want to know your opinions. You’re the president of the United States.

The Trump administration successfully derailed the House Oversight Committee’s investigation into Russia’s meddling the U.S. election by claiming that Susan Rice, national security adviser under Obama, improperly “unmasked” the names of Trump campaign associates. Rice has since repeatedly denied any wrongdoing, which would have also required the cooperation of the National Security Agency.

While the “unmasking” of names of Americans incidentally collected in surveillance is entirely separate—technically and legally—from wiretapping, the White House briefly used claims about Rice to justify Trump’s assertions about Obama.

The issue, as Dickerson’s exchange with Trump shows, remains an open question.