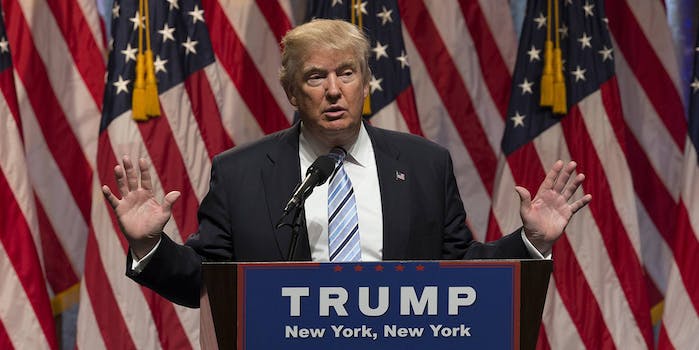 The Republican party has been quick to distance itself from Duke.

On Sunday, Republican presidential nominee Donald J. Trump appeared on NBC’s Meet The Press with Chuck Todd. He was once again forced to tangle with one of the thorniest issues that’s plagued him throughout his presidential candidacy: the question of former KKK grand wizard and neo-Nazi David Duke, who’s been Trump’s most notorious supporter within America’s racist right-wing.

Trump famously failed to immediately repudiate Duke’s support in February, while being interviewed by CNN’s Jake Tapper, which set off months of criticism and controversy. Since then, Trump has repeatedly disavowed him, but that first image—of him seemingly being wary of too forcefully condemning the notorious racist, who he later falsely claimed to have no knowledge of―has never truly faded away.

And after his sit-down with Todd, it figures to be a renewed topic of conversation. Todd started by asking the legendarily combative real estate magnate about Duke’s recent decision to run for the U.S. senate in Louisiana, a choice he made just one day following Trump’s incendiary RNC speech. In fact, Duke credited Trump’s success with pushing him back into electoral politics.

Todd introduced the topic, saying “David Duke announced his Senate candidacy, claiming your agenda for his own, or essentially saying ‘glad that you spoke out,’” to which Trump immediately interjected, “are you ready before you ask the question?” It was obvious that Trump was anticipating the question.

Todd went on, pointing out that Newt Gingrich, who was on Trump’s VP shortlist prior to the selection of Indiana governor Mike Pence, had called for all Republicans to repudiate Duke’s extremist politics. Trump insisted that he did and still does, at which point Todd dropped a question that’s going to be talked about for a while: “Would you vote for a Democrat instead of David Duke?”

“I guess, depending on who the Democrat, but the answer is yes.”

Trump finished with a “yes,” but sadly for him and all his supporters and donors, that wasn’t all he said. He started by clarifying that his vote was contingent on which Democrat was running, which—unless the Democrat in question is 1980s-era David Duke—is not a qualification that any serious politician really needs to make.

Trump then pivoted to criticizing the treatment he’d received since the last time he played softball with Duke, in that February interview with Tapper.

“The answer is, as quick as you can say it, in fact I wanted to answer you before you said it … cause last time, with another person in your position, I did it very quickly and they said ‘he didn’t do it fast enough.’ Rebuked, is that okay? Rebuked! Done.”

Unfortunately for Trump, his conspicuous qualification will probably mean this is not “done.” His comments to Todd came hot on the heels of a bizarre post-RNC Saturday, to boot. Less than 24 hours after wrapping up his speech accepting the GOP nomination, Trump held a press conference. With an awkward-looking Pence behind him, he once again rehashed his feud with Texas Sen. Ted Cruz.

Specifically, Trump accused the Cruz campaign of being involved in a Super PAC ad attacking his wife Melania, as to justify his own sexist and personal attacks directed at Heidi Cruz. Even more shockingly, Trump insinuated yet again that Cruz’s father Rafael might have been somehow involved in the JFK assassination.

Then, on Saturday evening, Trump tweeted out the utterly bizarre video embedded above, boasting about how many minutes of raw applause there were during his RNC speech. His speech had been scrutinized for its tremendous length, so maybe the video was an attempt to shift the focus.

In short, any elected Republicans who were hoping (as they have countless times before) that Trump was about to turn a corner and become some sort of controllable, inoffensive GOP standard-bearer probably shouldn’t hold their breaths. If the past several months have proved anything, it’s that party unity demands an unequivocal acceptance of their candidate no matter how self-destructive, bizarre or inflammatory he might be.