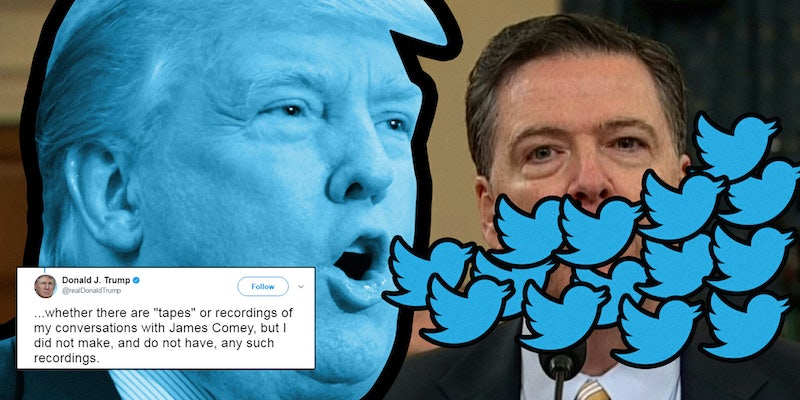 Trump claims he has no Comey tapes

President Trump's threat appears to never have been real.

In a series of tweets that came out just hours after the Senate released its controversial healthcare bill, Trump said he “did not make, and [does] not have” any recordings of him and Comey speaking to one another.

…whether there are "tapes" or recordings of my conversations with James Comey, but I did not make, and do not have, any such recordings.

Besides admitting he was bluffing about having tapes, Trump seemed to imply that he did not know whether the White House was being spied on.

Shortly after firing Comey in early May, Trump tweeted a thinly veiled threat to former FBI director, saying that Comey “better hope that there are no ‘tapes’ of our conversations before he starts leaking to the press!”

The calls only grew louder when it was revealed through memos Comey kept of his conversations with the president that he felt as if Trump was asking him to end the FBI’s investigation into former National Security Adviser Michael Flynn, who was asked to resign after then-Acting Attorney General Sally Yates warned the White House he might be susceptible to blackmail by Russia.

During his testimony before the Senate Intelligence Committee, Comey seemed to think that any tapes Trump may have had of conversations between the two would back-up his version of what transpired.

“I’ve seen the tweet about tapes,” Comey said during the hearing. “Lordy, I hope there are tapes.”

Earlier this month, Trump seemed to hint that his threat about having tapes of his conversations was a bluff.

During a press conference on June 9—when Trump said he was “one-hundred percent” willing to testify under oath about his interactions with the former FBI Director—he said he would reveal the truth about the existence of recordings in a “fairly short period of time.”

Trump added that the press would be “very disappointed” with his answer.