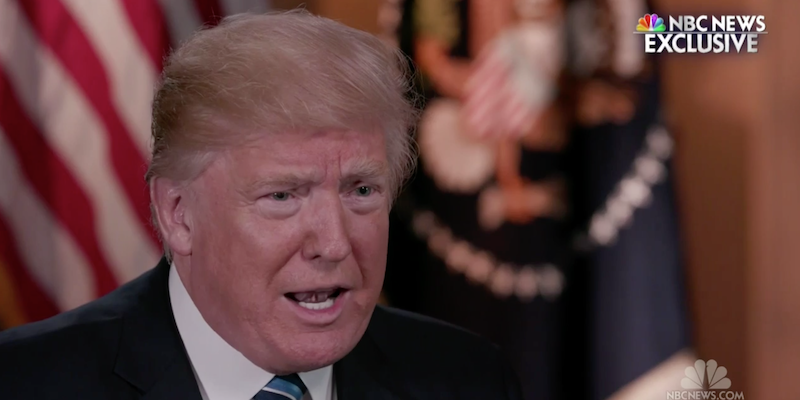 Trump: Comey a ‘showboat,’ says he planned to fire him ‘regardless’ of DOJ input

Trump also said the FBI was 'in turmoil' under Comey's watch.

On Thursday afternoon, NBC News released a preview of what to expect during the interview that will air tonight. The interview sheds further light on Trump’s surprise decision to fire a top U.S. law enforcement official who was actively involved in an investigation into the Trump campaign’s ties to Russia.

Trump drilled down on claims by his administration that he had been planning to fire Comey before receiving the recommendation from the Attorney General’s office. Trump also denied ever trying to pressure Comey into dropping the FBI’s investigation of his campaign’s ties with Russia. Further, Trump claimed that he planned to fire Comey “regardless” of Deputy Attorney General Rod Rosenstein’s recommendation that he do so.

“He’s a showboat, he’s grandstander, the FBI has been in turmoil,” Trump told Holt. “You know that, I know that. Everybody knows that. You take a look at the FBI a year ago, it was in virtual turmoil, less than a year ago. It hasn’t recovered from that.”

Trump also spoke with Holt about his conversations with Comey where the former FBI director allegedly told the president he was not under investigation.

“I know I’m not under investigation,” Trump added.

The interview has been called “wide-ranging.” It will air at 6:30pm ET Thursday on NBC News.