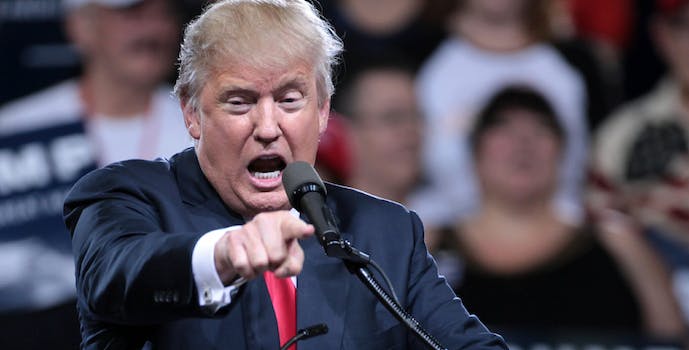 President Donald Trump’s contempt for the news media and reporters popped up again amid his apparent requests of former FBI Director James Comey to end the investigation into Michael Flynn.

In a New York Times report published on Tuesday—which outlined memos written by Comey about Trump trying to influence the FBI’s investigation into the Trump campaign’s possible ties with Russia —the president asked Vice President Mike Pence and Attorney General Jeff Sessions to leave the room, leaving him alone with Comey.

During the discussion, Trump began “condemning leaks to the news media,” according to the Times, and suggested Comey “should consider putting reporters in prison for publishing classified information.”

Trump has long had disdain for the freedom of the press—or the “enemy of the American people,” as he’s called it.

During his presidential campaign, he said he wanted to change libel laws, has called reports “very dishonest,” and he repeatedly calls news he doesn’t like “fake news.” Just last week, Trump suggested that he may end the daily White House press briefings.

But asking the FBI director to jail journalists for doing their job is a new dream of Trump’s.

The Reporters Committee for Freedom of the Press, an advocacy organization that aims to protect the First Amendment and journalists’ rights, quickly condemned Trump’s exchange with Comey outlined in the Times article.

“The comments attributed to President Trump cross a dangerous line,” the committee said in a statement. “But no president gets to jail journalists. Reporters are protected by judges and juries, by a Congress that relies on them to stay informed, and by a Justice Department that for decades has honored the role of a free press by spurning prosecutions of journalists for publishing leaks of classified information.”

“Comments such as these, emerging in the way they did, only remind us that every day public servants are reaching out to reporters to ensure the public is aware of the risks today to rule of law in this country. The president’s remarks should not intimidate the press but inspire it.”

Last week, a journalist was arrested at a West Virginia healthcare event as he was trying to ask U.S. Health and Human Services Secretary Tom Price a question. The Committee to Protect Journalists called his arrest “an affront to press freedom.”