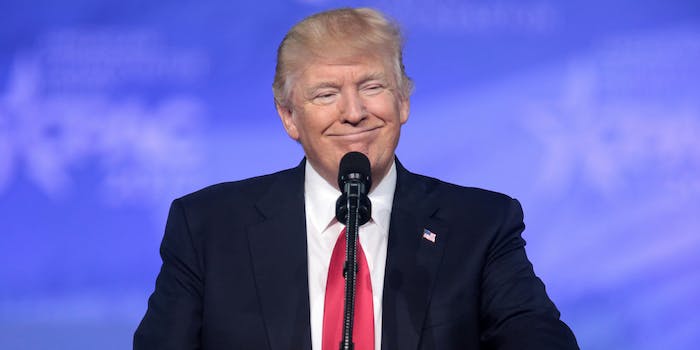 President Donald Trump talked a lot about bringing back coal jobs during the campaign, and earlier this year boasted that 45,000 jobs in the sector had been created since the start of his presidency.

However, that number appears to be grossly inflated and seems to be a number that Trump relies on when boasting about other policy matters.

In July, Trump said the United States “picked up” 45,000 mining jobs in a “very short period of time.” Newsweek reports that since January, 1,200 coal jobs have been created—just under three percent of what he bragged about creating—according to numbers compiled by the Bureau of Labor Statistics.

The numbers show that when Trump took office in January, there were 50,000 jobs in the coal mining industry and as of November’s data, that number has risen to 51,200 jobs.

While Trump’s inflated number of coal jobs being created is striking, the president has used the “45,000” number quite a bit in the past as a measure of success.

In March, Trump tweeted twice about “45,000 construction & manufacturing jobs” being created in the United States and congratulated Exxon Mobil, the company that Secretary of State Rex Tillerson was once the CEO of, for investing $20 billion to help create the jobs.

Thank you to @exxonmobil for your $20 billion investment that is creating more than 45,000 manufacturing & construction jobs in the USA!

In September, Trump also set the cap on the number of refugees that could enter the United States at 45,000–the lowest number in decades, according to Politico.

The 45,000 mark was also used by the president to measure his crowd size, an issue he has repeatedly harped on in the past.

During his bizarre speech at the annual Boy Scouts Jamboree in July, the president estimated that the crowd size was 45,000 people. Around 30,000 scouts reportedly showing up for the event.

The head of the Boy Scouts of America issued an apology to the group following the “political rhetoric” that was injected into Trump’s speech.

And in case you were wondering, Trump is the 45th president.