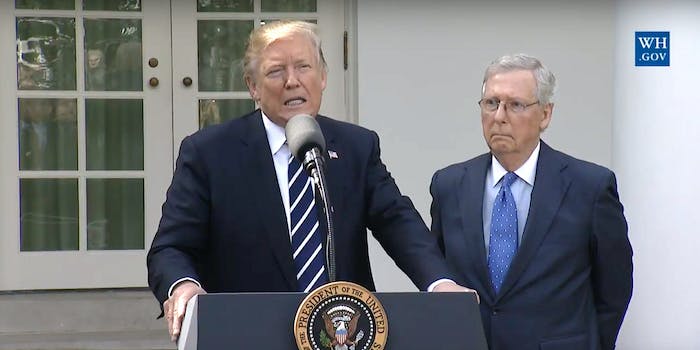 President Donald Trump on Monday claimed that former President Barack Obama and other past presidents did not call the families of soldiers after they died in combat, which has been denied by former aides of presidents.

When asked during a White House press conference about American soldiers killed in Niger, Trump said they made “the ultimate sacrifice” and rambled a bit about when exactly he reached out to their families before making the unsubstantiated claims against Obama and other presidents.

“I’ve written them personal letters; they’ve been sent or they’re going out tonight, but there were during the weekend,” Trump said. “I will at some point during the period of time call the parents and the families because I have done that, traditionally,” Trump said. “I felt very, very badly about that. I always feel badly. It’s the toughest. The toughest calls I have to make are the calls where this happens–soldiers are killed. It’s a very difficult thing. It gets to a point where, you know, you make four or five of them in one day, it’s a very, very tough day for me. By far, that’s the toughest. So, the traditional way, if you look at President Obama and other presidents, most of them didn’t make calls. A lot of them didn’t make calls. I like to call when it’s appropriate, when I think I’m able to do it.”

Four American soldiers were killed on Oct. 4 in Niger during an ambush involving approximately 50 fighters affiliated with the so-called Islamic State, according to the Pentagon. The militants left several others injured. Those killed during the incident include Army Sgt. La David Johnson, Staff Sgt. Bryan Black, Staff Sgt. Dustin Wright, and Staff Sgt. Jeremiah Johnson. The incident remains under investigation.

Trump on soldiers killed in Niger: "President Obama and other presidents, most of them didn't make calls … I call when it's appropriate." pic.twitter.com/sgj5iEuDhz

Pressed on the issue of phone calls to the families of fallen soldiers, Trump quickly backtracked on his claim.

Dan Pfeiffer, an Obama advisor, called Trump an “ignoramus who is a pathological liar.”

that's a fucking lie. to say president obama (or past presidents) didn't call the family members of soldiers KIA – he's a deranged animal.