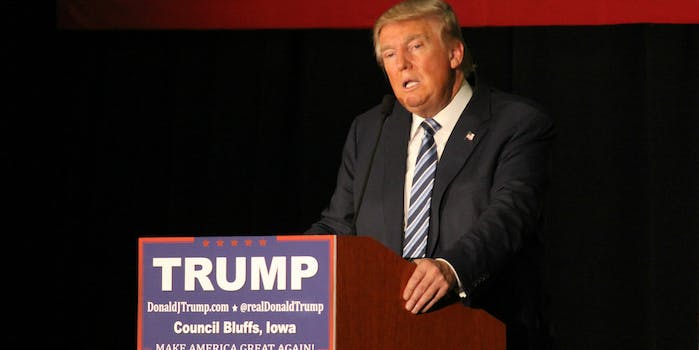 In a fundraising speech Wednesday night in Missouri, President Donald Trump boasted about making up facts while meeting with Canadian Prime Minister Justin Trudeau, according to the Washington Post.

Trump spoke for 30 minutes to donors at a fundraiser for Josh Hawley, a Republican challenging Sen. Claire McCaskill in November. During the speech, Trump openly bragged about how he misled our neighbor to the north over one of his favorite topics, trade deficits.

“Trudeau came to see me. He’s a good guy, Justin. He said, ‘No, no, we have no trade deficit with you, we have none. Donald, please,’ ” Trump said, mimicking Trudeau, according to audio of the private event in Missouri obtained by The Washington Post. “Nice guy, good-looking guy, comes in — ‘Donald, we have no trade deficit.’ He’s very proud because everybody else, you know, we’re getting killed.

‘Well, sir, you’re actually right. We have no deficit, but that doesn’t include energy and timber. … And when you do, we lose $17 billion a year.’ It’s incredible.”

When reached by the Post, the United States Trade Representative office said that the U.S. actually has a trade surplus with Canada.

Trump’s assertion about America’s trade deficits with numerous nations were the basis for his new steel and aluminum tariffs last week, as well as his ardent stance that America renegotiate its trade deals with some of its closest allies. Trump has boasted about his ability to renegotiate these deals.

That, though, wasn’t even the biggest trade statement Trump made in his speech. According to the Post, Trump also alluded to removing U.S. troops stationed in South Korea over trade.