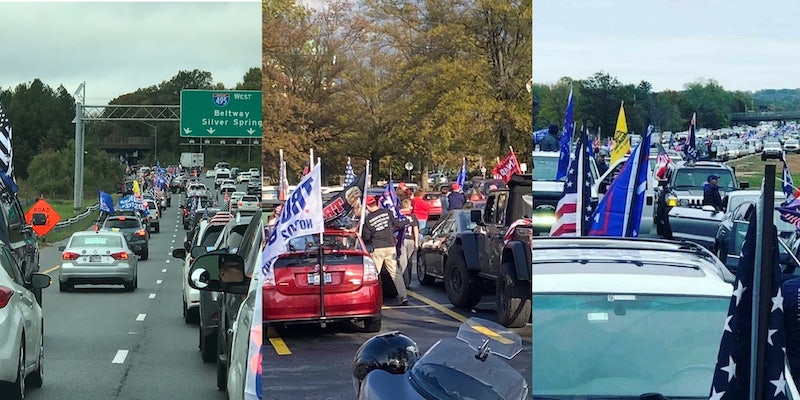 Pro-Trump caravans have flooded roadways across the country

The caravans are all over the country.

Supporters of President Donald Trump flooded roadways and halted traffic in multiple states this past weekend, with many reportedly calling out the blockades for intimidating voters.

A caravan was held in Washington, D.C. Saturday as a line of vehicles drove through the I-495 loop festooned with signs and flags featuring messages such as “Keep America Great” and “Drain the Swamp.”

On Sunday, vehicles took over the Garden State Parkway in New Jersey, effectively halting traffic on the Mario Cuomo Bridge between Tarrytown and Nyack, New York. The pro-Trump caravan started around noon, when vehicles sporting flags and signs were spotted on the bridge, with the number of vehicles reportedly growing in number to at least a few hundred, according to NBC New York.

The large caravan eventually slowed traffic to a standstill, as Trump supporters exited their vehicles and began waving flags and cheering.

Many who found themselves engulfed in the caravan were sharing their experience on social media.

“I DID IT, I FOUND HELL ON EARTH,” one user tweeted at 10:54am Sunday as they found themselves stuck on the roadway.

Several miles from the bridge, a different incident took place in New York City as scuffles broke out as anti-Trump protestors marched into Manhattan and clashed with Trump supporters near the High Line, resulting in some arrests.

In other parts of the country, a pattern appeared to follow suit as Trump supporters organized more rallies disrupting roadways and clashing with counter-protestors. Another caravan in Virginia resulted in a tense scuffle between protestors near a Robert E. Lee statue in Richmond, Virginia.

Other rallies were canceled out of concern regarding the pro-Trump caravans, with a Democratic rally in Georgia canceled out of fear of a “large militia presence” from a pro-Trump event that was supposed to be concurrently held nearby.

In Texas, another pro-Trump caravan, escorted by Forth Worth Police, was called out for intimidating voters as they drove through a polling station in a predominately Black neighborhood. Community members clashed with police officers and Trump supporters, as one man repeatedly shouted for the caravan to leave their neighborhood.

“Get out our hood, bro!” one community member shouted towards police officers and Trump supporters in the caravan.

These highway blockades across the nation appear to be inspired by an incident on Friday which is currently being investigated by the FBI in which a caravan of Trump supporters heckled a Biden campaign bus in Texas as it drove down I-35. Dozens of vehicles decorated with Trump signs and flags surrounded the bus on the highway, even reportedly slowing traffic to a 20 mph crawl at one point, according to CNN.

The bus was driving through I-35 Friday to a rally in downtown Austin. The event hoped to host speakers such as Rep. Wendy Davis (D-Texas) and Austin Mayor Steve Alder, but was reportedly canceled to not take away attention from campaigning events hosted by vice-presidential candidate Kamala Harris, who was making stops in Fort Worth, McAllen, and Houston that day, according to CBS Austin.

Though the bus was being closely followed by a Trump caravan, the Biden-Harris campaign told CBS Austin that the incident on I-35 was not the reason behind the cancelation of the rally on Friday. Neither Democratic presidential candidate Biden or his running mate, Kamala Harris, were on the bus.

Pflugerville House Representative and Texas City Council Member Sheryl Cole claimed that a joint event between the Biden-Harris campaign and Democrat organizations such as Austin Young Democrats was canceled in her city due to security reasons, saying pro-Trump protestors have “escalated well beyond safe limits” as footage of the bus surrounded by pro-Trump vehicles began gaining widespread attention on social media.

Trump endorsed the caravans, tweeting “I LOVE TEXAS,” showing outright support for the pro-Trump protestors who surrounded the campaign bus with their vehicles.

Sen. Marco Rubio (R-Fl.) also joined in on the support, stating that he “loved what they did” regarding the caravan blockades while at a rally for Trump’s re-election campaign in Miami Sunday night.

The caravan incident is currently being investigated by the FBI, according to a short statement released Sunday. They declined to further elaborate on the investigation.

Many are claiming the pro-Trump caravans popping up around the country are intimidating voters, as many tried to head to the polls before early voting ends in some states.

In addition to the caravans, the days leading up to the election have been flooded with a general uptick of voter intimidation and violence, with one Trump supporter reportedly pulling a weapon on a Black man in Richmond, Virginia.

With the presidential election right around the corner, these incidents taking place nationwide speak to the larger climate of deep political tension and divisiveness, as protesters on both sides of the political spectrum clash and civil unrest from police brutality and racial injustice from summer continue to heighten feelings of uncertainty and apprehension.