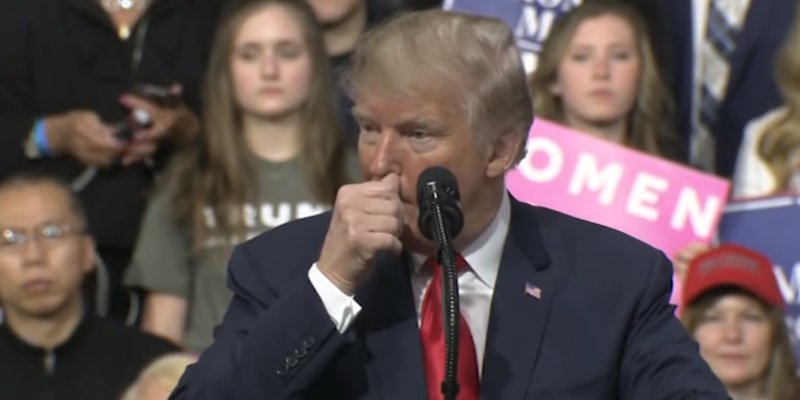 It was an inflammatory event, suffice to say.

On Saturday night, President Donald Trump arrived in the state of Pennsylvania, ostensibly to campaign for Republican congressional candidate Rick Saccone, who’s locked in a tight race, according to recent polls, with Democratic candidate Conor Lamb. But as is often the case when he hits the road for campaign rallies, Trump quickly became the focal point of the event, specifically thanks to a number of attention-grabbing statements he made. Perhaps, at the top of that list, is his suggestion that drug dealers ought to be executed.

Trump, speaking to a crowd of supporters in western Pennsylvania, suggested that the United States might be better off if it began enacting hard-line, draconian punishments against drug dealers, raising the idea of having them put to death. While noting that Singapore has a similar hardline approach, Trump purported to recount a conversation with the country’s leader.

“If you go to Singapore, I said, ‘Mr. President, what happens with your drugs?’” Trump said. “‘Nope, we don’t have a problem. We have a zero tolerance’―these guys aren’t playing games, they don’t play games.”

“That means if we catch a drug dealer, death penalty,” Trump said. He likely meant to attribute the quote, not to the president of Singapore, but its longtime prime minister Lee Hsien Loong, who he met during last year. The country’s president and official head of state is Hailmah Yacob, the first woman to hold the job in the country’s history.

President Trump discusses the death penalty for drug dealers: "I don't think we should play games … These people are killing our kids and they're killing our families and we have to do something" https://t.co/1xGAt31yBz

Trump went on to claim that drug dealers in America can kill “thousands of people, and go to jail for 30 days.”

This is far from Trump’s first enthusiastic endorsement of capital punishment. In the late 1980s, Trump infamously took out a full-page ad in the New York Times calling for five teens convicted of a violent assault in Central Park to be executed. Known as the Central Park Five, the youths were later cleared of any wrongdoing, but Trump continued to publicly assert their guilt and offered no apology for wrongly calling for their execution, even as recently as during the 2016 presidential election.

At the rally, Trump also said, like he often did on the campaign trail, how much he loves women. “Women! We love you! We love you. Hey, didn’t we surprise them with women during the election? Remember? ‘Women won’t like Donald Trump.’ I said, have I really had that kind of a problem? I don’t think so,” he told the crowd.

At the event, the president also returned to one of his favorite rally pastimes: attacking mainstream media figures and Democratic politicians. Specifically, he verbally assailed NBC News’ Chuck Todd in front of a nationally televised audience, calling the longtime NBC News personality a “sleepy-eyed son of a bitch.” Todd’s colleague Tom Brokaw was none too pleased with the remark, sarcastically tweeting on Saturday night that it was “really classy.” Todd, who hosts Meet the Press, has not yet publicly responded to the attack.

He also attacked Democratic Congresswoman Maxine Waters, who has frequently called for Trump’s impeachment. While maintaining that he hadn’t done anything wrong to merit impeachment, Trump referred to the 14-term California congresswoman, one of a handful of Black women serving in the U.S. Congress, as a “low-IQ individual.” Trump has repeatedly claimed to have a high IQ, although there is no empirical evidence to prove it.