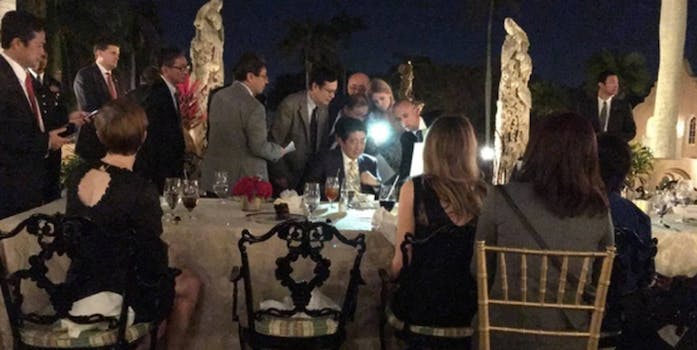 The two leaders were at dinner on Saturday evening when aides informed them of North Korea’s launch of a new ballistic missile, which landed in international waters near Japan.

CNN reported that that the two leaders then met on a public terrace with a bevy of aides from both countries, including National Security Adviser Michael Flynn and chief strategist Steve Bannon. The group was in full view of guests at the Mar-a-Lago. Many took photos that later appeared on social media. As CNN reported, waiters “cleared the wedge salads and brought along the main course as Trump and Abe continued consulting with aides.”

200K to Mar-a-Lago basically buys you a seat in the Situation Room https://t.co/5t55wN4QeW pic.twitter.com/tdNltbbirM

It’s unknown whether Trump and Abe’s decision to hold a meeting in such a public environment in full view of guests and resort staff without top-secret security clearances posed a risk to national security.

DeAgazio also posed with the U.S. Marine tasked with carrying Trump’s “nuclear suitcase.” The so-called “nuclear football” has followed around every president since John F. Kennedy and enables the president to launch a nuclear attack from outside the White House. It also allows the president to communicate with the National Military Command Center in the Pentagon and contains the nuclear codes needed to launch a nuclear attack anywhere in the world.

And merely identifying the briefcase or the officer tasked with guarding it is not a risk in itself. The nuclear briefcase has been photographed many times.

John Noonan, a Minuteman III nuclear launch officer under former Presidents George W. Bush and Barack Obama, posted a photo from Reagan’s state visit to the Soviet Union in 1988, where you can plainly see the officer holding the nuclear briefcase on the Red Square in Moscow.

Carelessness in matters of national security isn’t just Trumpian. Former presidents Jimmy Carter and Bill Clinton both on separate occasions misplaced the “nuclear biscuit”, a laminated card with the nuclear codes intended to remain on the Leader of the Free World’s person at all times. The aide in charge of the nuclear briefcase was separated from President Ronald Reagan for several hours during an assassination attempt in 1981. Regan’s nuclear codes were later found in a hospital plastic bag.