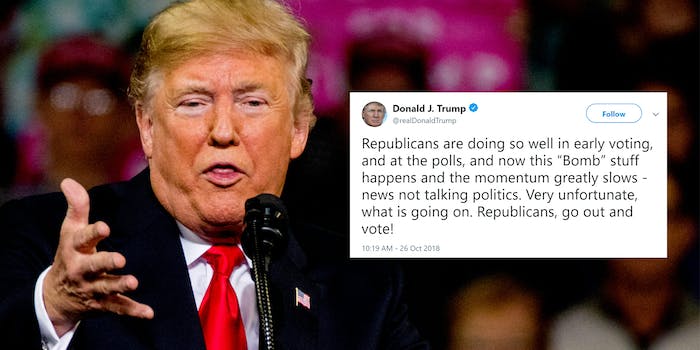 Trump complains bomb packages may hurt him in the midterms

His tweet has been blasted for apparently endorsing a false flag conspiracy.

In the past week, as the 2018 midterms approached, Republicans felt good that with the media coverage on immigration—and a caravan of migrants thousands of miles away—their voters would be motivated to head to the polls.

Unfortunately, President Donald Trump lamented on Twitter, someone recently may have tried to assassinate every major figure in the Democratic Party.

“Republicans are doing so well in early voting, and at the polls, and now this ‘Bomb’ stuff happens and the momentum greatly slows – news not talking politics,” Trump wrote. “Very unfortunate, what is going on. Republicans, go out and vote!”

Republicans are doing so well in early voting, and at the polls, and now this “Bomb” stuff happens and the momentum greatly slows – news not talking politics. Very unfortunate, what is going on. Republicans, go out and vote!

What is going on, again, he is saying, is not that the actual bombings are occurring, but that they aren’t helping his party. The Trump tweet, putting “bomb” in quotes, is also is somewhat a nod to the fervent supporters of his party, who are adamant the attacks are some sort of false flag operation fabricated to distract the masses, a notion entertained even by his own son.

There’s the false flag tweet we’ve been waiting for https://t.co/JTC4Qe4YwK

As Trump’s tweet went out, authorities announced a suspect has been arrested in connection with the packages. He has yet to tweet as of press time.