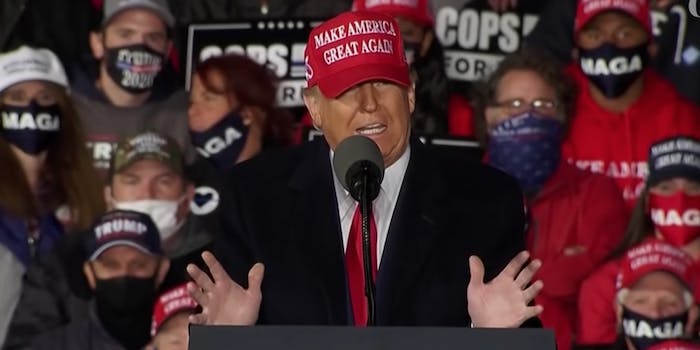 'Could you imagine if I lose?' he says, calling Biden the 'worst candidate in the history of presidential politics.'

During an October campaign rally in Georgia, Trump joked about how he’d react if he were to lose the 2020 presidential race.

“I shouldn’t joke, I shouldn’t joke because you know what? Running against the worst candidate in the history of presidential politics puts pressure on me,” Trump said. “Could you imagine if I lose?”

Trump went on to suggest that he might even have to leave the country if Biden were to defeat him in November.

“My whole life—what am I going to do? I’m going to say, I lost to the worst candidate in the history of politics!” Trump said. “I’m not going to feel so good. Maybe I’ll have to leave the country. I don’t know.”

Biden responded to Trump’s remarks at the time with a video on Twitter.

The footage of Trump’s old statements began circulating on Twitter again over the weekend as users celebrated Biden’s win.

Countless users also offered to help Trump leave the country if need be.

“I’m willing to pay for an immigration lawyer if Donald Trump is willing to keep his promise to leave the country and never return,” @ZaacHunt said.

Many users also hoped that in this instance Trump would finally keep his word. “Trump has never been a man of his word but hopefully just this once,” @Themanske47 said.

It currently remains unclear what exactly Trump plans to do given that he has thus far refused to concede the election.

In a desperate last-ditch effort to cling to power, Trump’s team has begun filing lawsuits in numerous states in an attempt to prove the totally unsubstantiated claim that widespread voter fraud cost him the election.