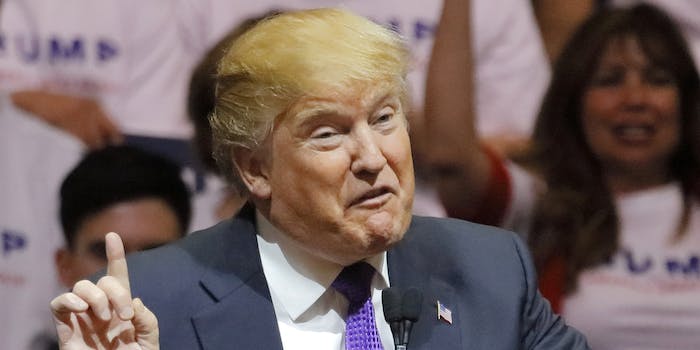 The foreign-relations dustup follows a reportedly disastrous Jan. 28 phone call between Trump and Prime Minister Malcolm Turnbull during which America’s president argued with the prime minister “over a refu­gee agreement and boasted about the magnitude of his electoral college win,” as the Washington Post describes it, based on information from senior U.S. officials.

The Obama administration previously agreed to take in 1,250 refugees from Australia’s Pacific island camps. Trump, who recently suspended the U.S. refugee program, reportedly scoffed at the deal, said agreeing to it would “get him killed” politically, and told Turnbull that he was attempting to export “the next Boston Bombers.” Moments later, Trump abruptly hung up.

On Wednesday evening, soon after the Post published its story, Trump tweeted about the “dumb” refugee deal, which he vowed to “study.”

Do you believe it? The Obama Administration agreed to take thousands of illegal immigrants from Australia. Why? I will study this dumb deal!

Then, on Thursday, the U.S. Embassy in Canberra confirmed that the Trump administration agreed to uphold the deal and accept the refugees into the U.S.

Statement from the US Embassy in Canberra. Trump Whitehouse will honour the refugee deal. Wow. pic.twitter.com/atJqPpPe6T

Alas, the damage was done. Critical observers of the spat between Trump and Turnbull reacted with open-jaw amazement at what appeared to be Trump damaging U.S. relations with a long-time ally.

WHO FIGHTS WITH AUSTRALIA?!?!

In a statement released on Thursday, Sen. John McCain (R-Ariz.) said he spoke with Australia’s ambassador to reaffirm “to the people of Australia that their American brothers and sisters value our historic alliance, honor the sacrifice of the Australians who have served and are serving by our side, and remain committed to the safer, freer, and better world that Australia does far more than its fair share to protect and promote.”

“Those of us who took part in the conflict remember well the service of more than 50,000 Australians in the Vietnam War, including more than 500 that gave their lives,” added McCain, who has regularly criticized Trump and his actions.

This is day 13 of the Trump presidency.