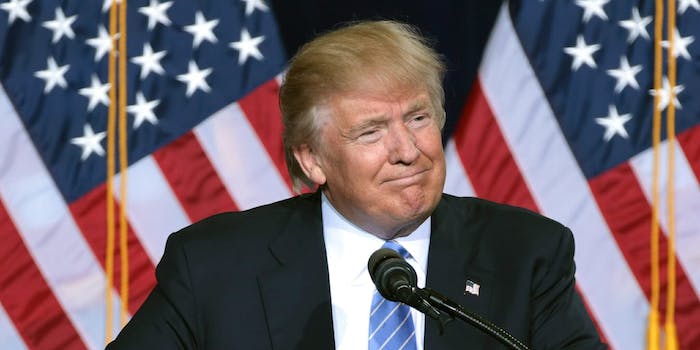 The president won't let this one go.

President Donald Trump’s spat with late Sen. John McCain (R-Ariz.) continued on Wednesday as the president complained he “didn’t get a thank you” for giving McCain the “the kind of funeral that he wanted.”

“I gave him the kind of funeral that he wanted, which as president I had to approve,” Trump said on a visit to an Ohio tank factory. “I don’t care about this, I didn’t get a thank you. That’s OK.”

McCain, who was a Vietnam War veteran, was honored with a state funeral when he died of brain cancer in August, aged 81.

The president went on to attack the late senator for killing the Obamacare repeal and his record in supporting the Iraq War.

“Not my kind of guy,” Trump continued. “But some people like him and I think that’s great.”

This latest round in the president’s ongoing feud with a dead man was revived on Twitter at the weekend when Trump blasted “last in his class” McCain for forwarding the “the Fake Dossier to the FBI.”

Whatever the president hopes to imply in Wednesday’s comments, however, he can’t take all the credit since it was actually Congress that granted McCain the honor of lying in state. What Trump did approve was a military flight to transport the body to Washington, D.C., from the senator’s home state of Arizona.

This rivalry between McCain and Trump began back in 2015 when the senator blasted the then-presidential candidate for his anti-immigration rhetoric. At the time Trump controversially shot back by questioning whether the Republican senator was a war hero at all since he’d been captured.

Online, replies from the right were mixed: Trump conservative critics attacked him on Twitter, conspiracy theorists chimed in, far-right trolls spun the attacks against the media, and McCain’s daughter Meghan retweeted her sister Bridget’s pushback.

“Even if you were invited to my dad’s funeral, you would have only wanted to be there for the credit and not for any condolences. Unfortunately, you could not be counted on to be courteous, as you are a child in the most important role the world knows,” Bridget McCain tweeted.

McCain’s former speechwriter, Mark Salter, reportedly took a shot at Trump too, saying he didn’t understand the president because he is “not a child psychologist.”

At the time the Republican establishment raged at Trump’s mocking of a veteran. Now, notably, except for a few angry voices, the party is mute.