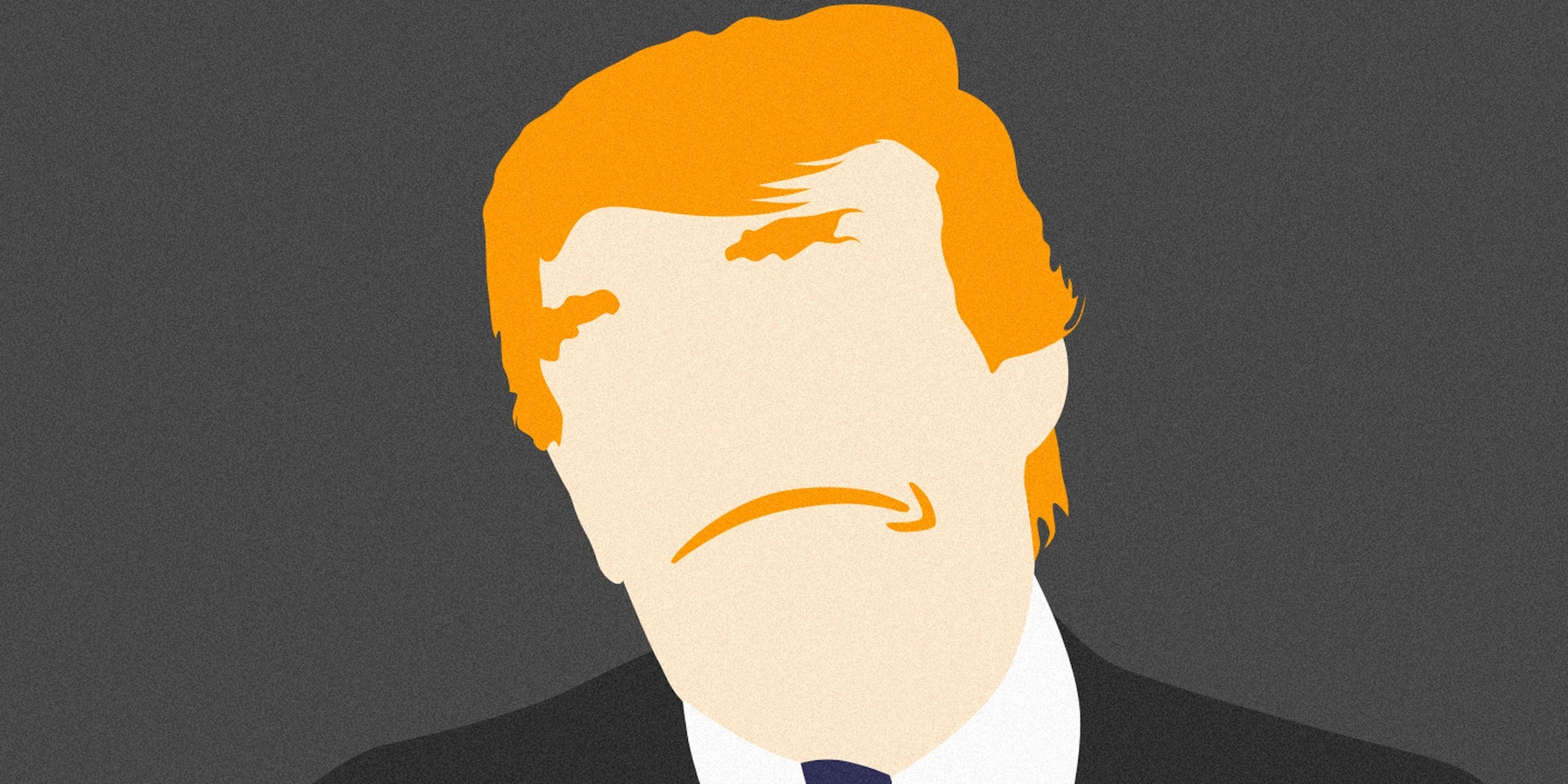 Trump was signing a different tune about Amazon when he was promoting his book.

President Donald Trump has a long history of attacking Amazon–and Thursday morning was no different.

The president, seemingly responding to reports that he was “obsessed” with Amazon, tried to explain his feelings about the online retail giant.

“I have stated my concerns with Amazon long before the Election. Unlike others, they pay little or no taxes to state & local governments, use our Postal System as their Delivery Boy (causing tremendous loss to the U.S.), and are putting many thousands of retailers out of business!” he wrote on Twitter.

The report, published by Axios, said the president has considered going after Amazon “with antitrust or competition law,” and that his friends in real estate have vented to him about Amazon hurting their business. This notion was hinted at in August 2017, when the president said Amazon was “doing great damage to tax paying retailers” and causing “many jobs” to be lost.

But judging from Trump’s past tweets, there is a significant amount of evidence to suggest that the president is, in fact, “obsessed” with Amazon.

Late last year, Trump said the relationship between the United States Postal Service and Amazon was unfair, arguing that the agency “should be charging MUCH MORE” to deliver packages for the online business.

While Trump was correct in his assertion that the postal service is losing money, the agency did add deliveries on Sundays because of the money Amazon has paid them.

Why is the United States Post Office, which is losing many billions of dollars a year, while charging Amazon and others so little to deliver their packages, making Amazon richer and the Post Office dumber and poorer? Should be charging MUCH MORE!

At least part of the feud between Trump and Amazon could stem from Amazon’s founder, Jeff Bezos, who owns the Washington Post, a frequent target of the president’s angst on Twitter.

For a solid portion of the summer of 2017, Trump railed against the “fake news” in the Washington Post, often times bringing up Amazon in the process.

On July 24, 2017, the president tweeted about Amazon / the Washington Post three separate times, including one tweet where he openly wondered if the Post was being “used as a lobbyist weapon against Congress to keep politicians from looking into Amazon” and its taxes.

The president claimed in June 2017 that Amazon was “not paying internet taxes”–which doesn’t make much sense, because there is no such thing. Amazon customers do pay sales tax on their purchases and the company has lobbied for an internet sales tax in the past.

He even tried to start a hashtag, #AmazonWashingtonPost, during his 2017 summer of criticizing the retail website. It’s really hasn’t caught on much.

To his credit, Trump has voiced his “concerns” with Amazon for years, as he said on Thursday.

In 2015, the president tweeted about the company five times–including one where he predicted Amazon would “crash” and “crumble like a paper bag” if the company “had to pay fair taxes.”

But Trump hasn’t always been upset with Amazon.

He congratulated Dana Perino, a Fox News contributor, for one of her books selling well on the website in a 2015 tweet and did the same for Rush Limbaugh in 2013.

The president seemed eager to promote his book Time To Get Tough between 2011 and 2014, which including linking to Amazon often.

Over the span of four years, Trump tweeted about Amazon selling out of his book, told people to pre-order it on the website, and tweeted out several links to his book on Amazon, calling it a “great gift idea.”

It’s pretty clear Amazon has been on the president’s mind for years, just not always in the same way.