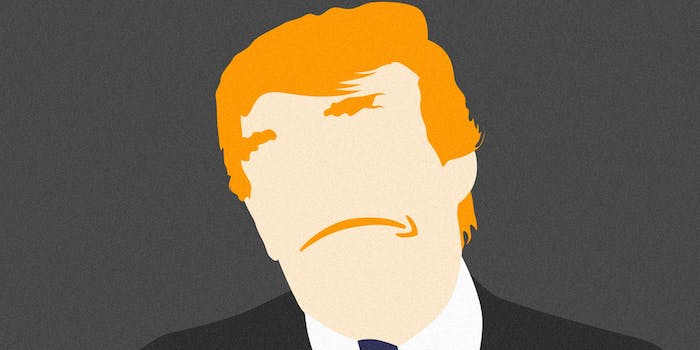 There's a lot to untangle here.

President Donald Trump attacked Amazon on Wednesday morning in a garbled tweet that incorrectly implies the company owns the Washington Post, which, he claims, it uses to avoid paying a nonexistent ‘internet tax.’

So, where to begin with this latest outburst? Well, Amazon does not own the Washington Post—Amazon’s CEO Jeff Bezos personally bought the newspaper for $250 million in 2013. Trump, however, is convinced that Bezos is using the media outlet as a vehicle to protect Amazon against corporate tax liability.

Bezos’ ownership of both Amazon and the newspaper have been the subject of Trump’s ire for quite a while, since revelations that the newspaper’s journalists were looking into his past business dealings when he was the Republican presidential nominee.

In 2016, Trump told Fox News’ Sean Hannity that he believed Bezos was using the media outlet as a political vehicle.

On another occasion, propelled by the same narrative, Trump stated that if he won the presidency Amazon would “have problems.”

Trump on Amazon: "If I become president, oh do they have problems. They're going to have such problems". • $AMZNhttps://t.co/208DgKJM8o

Bezos condemned Trump’s allegations at the 2016 Vanity Fair New Establishment Summit in San Francisco: “To try and chill the media and threaten retribution and retaliation, which is what he’s done in a number of cases, it just isn’t appropriate.”

As for a federal ‘internet tax,’ there’s no such thing. Assuming Trump, as president, knows this to be true, it appears he may actually be threatening a tax on internet businesses in this long-running desire to give Amazon “problems.”

On the other hand, Trump may be oblivious to the fact that many American Amazon customers already pay sales tax on their purchases, under state law, which the company expanded to all 50 states in April. On top of that, alongside brick-and-mortar retailers and Walmart, the company has been heavily lobbying for an end to tax-free internet shopping for several years now. Those opposed to the effort, in fact, were Republican members of Congress.

Most revealing about the tweet, perhaps, is its timing. The Bezos-owned Washington Post revealed on Tuesday, to Trump’s personal embarrassment, that a Time magazine cover of himself, which he has displayed at his private golf resorts, is actually fake.

Commentators are already questioning whether the tweet is, in fact, a warning, an idle call for punishment on the publication owner’s other business, or simply nothing of any substance at all.