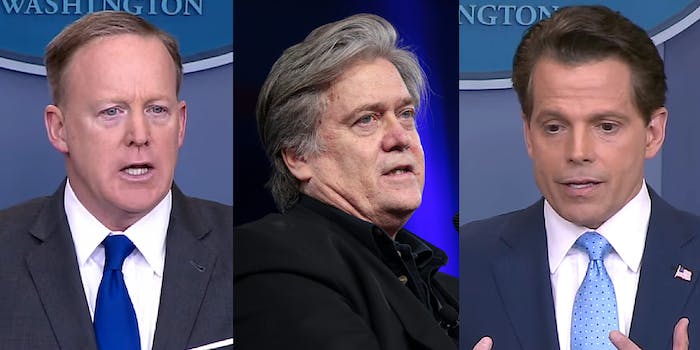 It wasn't just your imagination.

If it seems like people were departing the Trump administration at a break-neck pace in 2017, you’d be right. According to a new report from the Wall Street Journal, more people left the White House in Trump’s first year than any other administration.

The data comes from the Brooking Institute, which found that 21 of Trump’s 61 senior officials left the White House—the highest turnover in a president’s first year since it began tracking staff departures. That’s over a third of Trump’s senior staff that left.

The names, and some of their exits, have become iconic in their own right.

Among the staffers who graced us with their president-serving presence but who are no longer with us: Anthony Scaramucci, Sean Spicer, Reince Priebus, Michael Flynn, and Steve Bannon.

The next highest turnover rate in a president’s first year was under Ronald Reagan, when 17 percent of his staff left in 1981.

“Not only is the percentage double [Reagan’s number], the seniority of people leaving is extraordinarily high,” said the Brookings Institute’s Kathryn Dunn-Tenpas, “That’s unprecedented to me. The first year always seems to have some missteps on staffing, often because the skills that worked well running a campaign don’t always align with what it takes to run a government. In this case, it’s a president with no experience in government and people around him who also had no experience.”

Trump has repeatedly tweeted about how historic and record-breaking his administration is. It appears on this one, he’s telling the truth.

The Stock Market is setting record after record and unemployment is at a 17 year low. So many things accomplished by the Trump Administration, perhaps more than any other President in first year. Sadly, will never be reported correctly by the Fake News Media!

And for a president obsessed with outdoing Obama, he certainly blew his predecessor’s number away. In 2009, only 9 percent of Obama’s senior staff left.