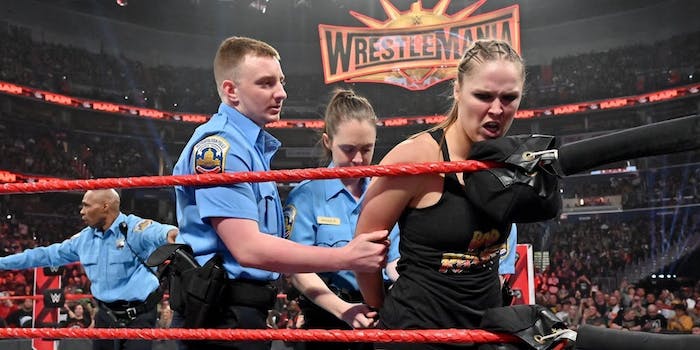 The Trump administration seemingly has a history of believing wrestling is real.

President Donald Trump’s administration appears to believe that the staged arrest of Ronda Rousey during a WWE Raw event in 2019 was actually real.

The revelation was discovered in a set of documents obtained by Politico that outline efforts by the U.S. Department of Health & Human Services (HHS) to rebrand the fight against coronavirus.

Contractors for HHS were tasked with compiling a list of celebrities and vetting their political beliefs before allowing them to participate in the advertising campaign to “defeat despair” linked to COVID-19.

Each celebrity is listed next to a column of “additional notes” that includes reports of arrests and other political information.

In the case of Rousey, the documents point out the wrestler’s support of Sen. Bernie Sanders (I-Vt.) before mentioning the fictitious arrest.

The so-called arrest took place in April of last year during an episode in which Rousey fought against Charlotte Flair and Becky Lynch. Two of the wrestlers, including Rousey, were placed in the back of a cop car where they continued fighting.

Rousey eventually kicked out the back window, broke out of the vehicle, and entered the driver’s seat before smashing into another police car. Rousey was “taken into custody” and even published a fake mugshot online.

Twitter users responded to the news by mocking the Trump administration for the apparent oversight.

Rousey has not weighed in on the news thus far. Twitter users also pointed to reports last month that claimed that Trump believed WWE Chairman Vince McMahon had died after an episode in which his limousine exploded.