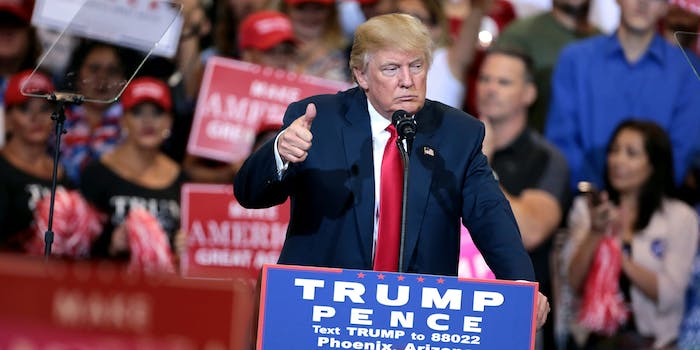 Some states are pushing back at the enormous data request.

President Donald Trump’s administration is facing pushback after it requested information on millions of American voters from all 50 states to be examined by the administration’s “election integrity” commission.

Kansas Secretary of State Kris Kobach, the vice chairman of the commission, sent a letter to every state asking for voters’ first and last names, birthdays, last four digits of their Social Security numbers, and voting histories going back to 2006.

There is no specific reason given on what the commission will do with the massive amount of voter data. Vice President Mike Pence, who is heading the commission, explained the commission’s purpose earlier this week.

“The integrity of the vote is a foundation of our democracy; this bipartisan commission will review ways to strengthen that integrity in order to protect and preserve the principle of one person, one vote,” he said.

However, critics of the mass collection of data on voters say the commission is nothing more than an effort to create voter suppression.

“King of Voter Suppression Kris Kobach and the Trump administration are launching a nationwide assault on voting rights,” Director of the ACLU’s Voting Rights Project Dale Ho said in a statement. “That Kobach—who has been successfully sued many times for voter suppression—is now asking for details on every single voter in the U.S. is deeply alarming and raises significant privacy concerns. States are right to balk at turning over massive reams of personal information in what clearly is a campaign to suppress the vote.”

Voters data may be of interest to Trump and his administration, as he as falsely claimed that millions of people voted illegally in the 2016 presidential election on numerous occasions. In response to his false assertion, Trump launched the Presidential Advisory Commission on Election Integrity.

Several lawmakers have bucked at the letter’s request, including Virginia Gov. Terry McAuliffe, a Democrat, who said he had “no intention” of honoring the committee’s request, according to the Washington Post.

Gov. Terry McAuliffe on the Kobach letter: "I have no intention of honoring this request." pic.twitter.com/aXfqkAMD70

“The entire commission is based on the specious and false notion that there was widespread voter fraud last November,” he said. “At best this commission was set up as a pretext to validate Donald Trump’s alternative election facts, and at worst is a tool to commit large-scale voter suppression.”

Similarly, Connecticut Secretary of State Denise Merrill said she would “share publicly-available information with the Kobach Commission while ensuring that the privacy of voters is honored by withholding protected data,” the Post reported.

New York Gov. Andrew Cuomo also refused to cooperate with the commission on the grounds that widespread voter fraud is a myth.

“New York refuses to perpetuate the myth voter fraud played a role in our election,” Cuomo said in a statement. “We will not be complying with this request.”

At least 24 states have so far refused to turn over voter data to the commission.

Increasing the concerns: According to Gizmodo, the White House is asking states to share the sensitive data over an unsecured email account.

Update 5:13pm CT, June 30: The number of states refusing to turn over voter data to the commission has increased from 19 to 24.