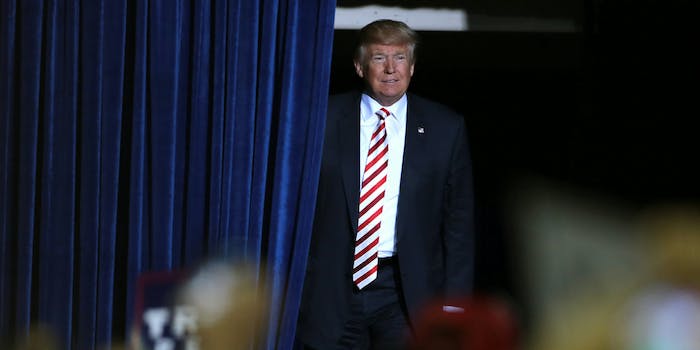 All is not well in Trump's White House.

President Donald Trump is growing increasingly frustrated and isolated as his presidency approaches the one year mark.

As turmoil continues to envelop Trump’s administration, the president has become “unstable,” and has started “unraveling,” and has been “consumed with dark moods,” according to sources who spoke with Vanity Fair. People within the administration are also not happy, the outlet reports, including Chief of Staff John Kelly who is “miserable” and remaining in his position to make sure the president does not make any “disastrous decision.”

The reasoning? A lack of meaningful movement on any legislative agenda items he promised during the campaign, and somewhat surprisingly, his decision to back Luther Strange, who lost to an extreme-right opponent in the Alabama Republican primary for the Senate seat vacated by Attorney General Jeff Sessions.

The tension in the White House has become so fraught that some officials are worried Trump may force his Cabinet to invoke the 25th Amendment to remove him from office, according to Vanity Fair.

Under the 25th Amendment, members of the president’s Cabinet could vote to discharge him from office, leaving Vice President Mike Pence in charge.

Former Trump adviser Steve Bannon, the head of notorious far-right website Breitbart, apparently has told people he thinks there is only a 30 percent chance Trump makes it to the end of his first term as president, Vanity Fair reports. Before leaving his White House position, Bannon reportedly told Trump that impeachment was not the biggest risk to his presidency–but rather the 25th Amendment.

The president’s response, according to the news outlet was: “What’s that?”

You can read all of Vanity Fair‘s full report here.