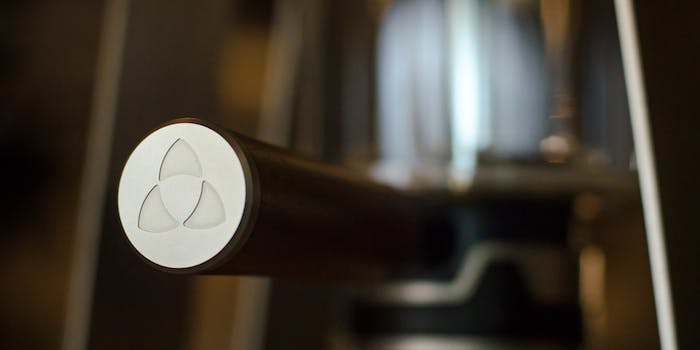 This luxurious machine is a coffee lover’s futuristic dream

Coffee nerds could debate endlessly over the best kind of brew. Some swear by the pour over method while others opt for a drip option. Arguably the trendiest choice is the AeroPress-style air pressure technique. Now there is a device to satisfy the needs of a wide variety of caffeine-craving coffee drinkers: the Trinity One.

The first creation of designer and engineer Mark Folker’s Trinity Coffee, the Trinity One aims to be the go-to device through which all beans are brewed. The countertop coffee maker isn’t designed to be tucked away in a cabinet or stored in a bag and taken with on trips. Rather, it’s a standalone device that serves as an indicator to all who touch down on your tiled kitchen floor that this is the house of a serious coffee drinker who does not take a cup of joe lightly. It is not a coffee maker, but a coffee appliance.

Even to the most practiced of home brewers out there, there may be some confusion in looking at the Trinity One. It looks like a trophy awarded to the most adept of coffee drinkers but, uh, how’s it work? The last thing a person wants while staggering half-asleep into the kitchen in the morning is a puzzle that has to be completed before coffee trickles into their mug.

The Trinity One consists of five parts: a press cylinder, an end cap, a brew chamber and stand, a filter head, and the brew camber. The double-walled chamber—a key component of the entire operation—consists of a glass exterior layer and an interior of Tritan plastic. That inner layer makes for versatile brewing options, utilizing a cylindrical section for the air pressure method and a conical opening for pour over style. It can also utilize both sections at once to achieve cold brews or concurrent brewing techniques. And if you understand what all that means, you’re salivating at this point.

For the layman, the Trinity One is essentially an all-in-one brewer that will make you the perfect cup of coffee no matter how you like it made. If Keurig is the fast food of the coffee world, Trinity One is the five-star restaurant with a two week wait list for reservations.

Already past its Kickstarter goal of $45,000, the Trinity One is approaching $65,000 raised and still has over a week of funding remaining. A pledge of $191 will land you an early edition of the ultimate brewer, projected to be delivered in January 2016—about a $100 discount off the expected retail price. That’s a long time to wait to get a cup of coffee, but it might be well worth it.