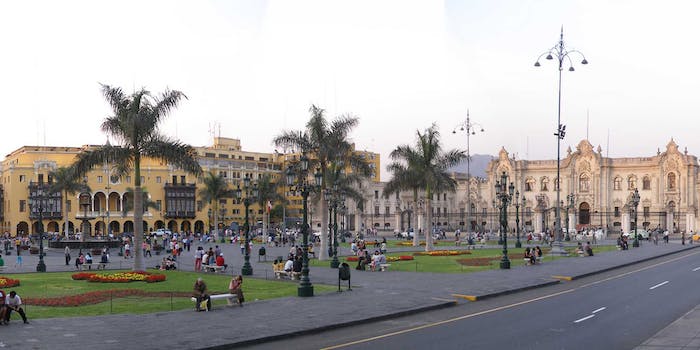 The Trans-Pacific Partnership, being negotiated in Peru this week, could mean a censored Internet for 12 countries.

Corporate interests, representatives from countries all over the world, and a handful of activists have gathered in Lima, Peru, to decide the future of the Internet.

They’re there, of course, for the 17th round of Trans-Pacific Partnership (TPP) talks.

The Internet is far from the only thing being discussed at the TPP, but it’s one of activists’ biggest concerns. That’s because it’s not actually elected officials who come to discuss new trade standards for the twelve participating countries, but appointed trade representatives. And while corporate interests are given chances to persuade those countries, concerned activists get stonewalled.

“We’re doing a lot of work on the ground in Lima,” Maira Sutton, a Global Policy Analyst at the Electronic Frontier Foundation, told the Daily Dot via email. She and an EFF partner, Katitza Rodriguez, are believed to be the only American Internet activists to show up in Lima, though representatives from a few South American digital advocacy groups have showed up.

As was the case in previous TPP meetings in countries around the world, Sutton is concerned that corporate interests that want much stricter copyright enforcement—even at the Internet’s expense—have a voice in how the TPP is negotiated. But activists probably won’t. For the past few rounds, they have been physically barred from attending, and Sutton expects the same treatment in Lima.

“The TPP is one of the worst global threats to the Internet,” Sutton and Rodriguez wrote in a joint EFF essay. They fear that certain drastic changes to the Internet that would never pass the U.S. Congress will become de facto law for all the TPP’s countries. Those include terminating Internet access to people suspected of copyright infringement and the ability for countries to broadly censor parts of the Internet.

Instead, the pair is hitting the streets, getting interviews on local TV and getting signatures from Peruvians for their president, Ollanta Humala, to take a stand on any part of the treaty that would affect the Internet. “Before Katitza showed up here a couple weeks ago, there really wasn’t ANY attention paid to TPP in Peru,” Sutton said. A Spanish-language petition to Humala is up to almost 2,000 signatures.