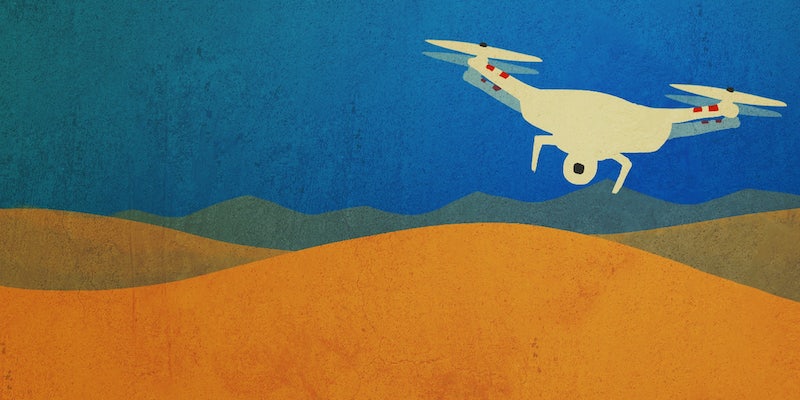 The toy drones of war and terror

They build them and buy them from toy stores.

On one of Iraq’s hottest June days, a contractor for the Ministry of Interior deployed a small drone from a rooftop in Fallujah. Hussam al-Mayahi was providing overwatch for units north of Shuhada 2, the ruins of a neighborhood on the front lines against the Islamic State. He and his drone acted as artillery observers for policemen shelling enemy positions deep inside the city with rocket launchers.

Hobbyist drones have become popular with many members of the Iraqi Security Forces, ranging from policemen to militiamen. Units of the People’s Mobilization (Hashd), an umbrella organization of several dozen Iranian-backed Shia militias and a smaller number of Christian, Sunni, and Yazidi paramilitaries, have employed radio-controlled aircraft in battles from Fallujah to Tikrit to improve the accuracy of their fire support. They build them and buy them from toy stores.

“This is the world we live in now, and there’s not a lot we can do to change that.”

“We manufacture the drones in Iraq and can only afford cameras because they require an engineer to make,” said Mustafa Ajeel, a press secretary close to the Badr Organization. “The drones are few in number. Mostly, the Hashd relies on the planes of the Iraqi government for information.” Badr, the largest and oldest of Iraq’s Shia militias, maintains an expansive organization that includes a political party and television channels. It should surprise few that the militia can make its own drones.

“We have drones filming ISIS, which benefit us in monitoring its movements on the ground,” said Karim al-Nouri, a spokesman for the Hashd. He, like many Hashd leaders, refused to explain further, but Najha al-Bakri, a fighter from Harakat Hezbollah al-Nujaba, added: “There are drones for photography and reconnaissance. Al-Nujaba has a section for military manufacturing.”

Militiamen without the infrastructure of Badr and al-Nujaba can buy off-the-shelf drones in urban markets. The Daily Dot visited a toy store in al-Mansur, a Baghdad neighborhood several miles from the Green Zone, where the owner claimed that members of the Hashd had come to purchase drones. He expressed puzzlement at the purchase, for his products lack the endurance and range of the drones available to the international coalition and the Iraqi military, with which the Hashd cooperates.

The Iraqi government has deployed the CH-4, a combat drone from the Chinese CASC Rainbow series, against ISIS car bombs and fighters. China, unlike its Western competitors, has few problems selling military technology to governments with questionable records on human rights. If, as Ajeel asserted, the Shia militias benefit from the Iraqi military’s own reconnaissance and surveillance, the need for them to waste money on off-the-shelf drones seems suspect.

Though militants have relied on makeshift airpower throughout much of the last decade, most of these examples involve resistance movements or terrorist organizations fighting governments and militaries that possess overwhelming air supremacy, and their success has been minimal. The Liberation Tigers of Tamil Eelam jumpstarted this trend by deploying the Air Tigers, their ill-fated air force, in a failed Kamikaze-style attack during the Sri Lankan Civil War, which they lost.

Palestinian journalist Yusuf al-Maqiad told the Daily Dot how Hamas had designed three types of drones to use against Israel during the 2014 war in the Gaza Strip only for the Israeli Air Force, which has decades of experience fighting domestic and foreign insurgents, to down one with ease. “Hamas has only used them after the war in military parades and experiments,” he said. In July 14, however, Israel said it downed a homemade Hamas along the southern Israeli coast. Al-Qassam Brigades, the military arm of Hamas, claimed on Twitter at the time that it had conducted “three missions over Israeli military bases” and a “specific mission over Israeli war ministry,” ABC News reported.

The Shia militias are fighting ISIS, which, in addition to lacking an air force, is facing airstrikes from several countries. In part, off-the-shelf drones provide an immediate tactical advantage over a reliance on intelligence from the Iraqi government and military, whose byzantine structure hinders cooperation between its branches. In addition, the Hashd’s arsenal has expanded.

“We obtain drones with the help of our brothers from the Islamic Republic of Iran,” Ahmad Radi al-Sarai, a leader in Kataib Ruhollah, told the Daily Dot. He added that the Quds Force, the special forces of the Islamic Revolutionary Guard Corps responsible for extraterritorial operations, has equipped the Shia militias with combat drones. Iran has already deployed its own drones in Iraq and Syria.

Kataib Hezbollah, a Shia militia that the U.S. State Department has labelled a terrorist organization for killing American soldiers during the Iraq War, has used Iranian-made drones in several battles. “We have intelligence, and our drones allow us to avoid civilian areas when we are shelling Fallujah,” Omran Wali, one of its commanders, said. A resident of Fallujah reached by Facebook, however, voiced concerns that Kataib Hezbollah was using the drones to target civilians in a campaign of ethnic cleansing.

The Institute for the Study of War has often reported that the Shia militias’ role in the anti-ISIS campaign and support for sectarianism may compromise the Iraqi government’s victories. Ready access to military-quality and off-the-shelf drones will strengthen their autonomy from the Prime Minister’s Office—which should, in theory, control them, but it fails to in practice.

“Most often we’ve seen hobbyist drones used for propaganda purposes to suggest these groups have eyes in the sky on the battlefield which, in some sense, taps into our own narratives about armed drone use,” Chris Biggers, a consultant and expert on drones, said in an email. “I think most analysts are waiting on armed groups to co-opt and mimic their more capable and lethal counterparts in order to play on a powerful narrative about uncertainty of violence from the air that drones evoke.”

Many Shia militias now fighting ISIS share Kataib Hezbollah’s history, having fought the Western coalition and even the Western-backed Iraqi government in the mid- and late-2000s. If they again turn on the thousands of American soldiers still stationed in Iraq, their wide range of drones will enhance their ability to conduct attacks with IEDs and mortars.

“There’s not really much the U.S. or anyone can do to about it,” Adam Rawnsley, a journalist focusing on Iranian drones, told the Daily Dot. “The technology of these smaller UAVs is so simple and so basic that it’s widely commercially available. It’d be like trying to stop terrorist groups from obtaining laptops. This is the world we live in now, and there’s not a lot we can do to change that.”