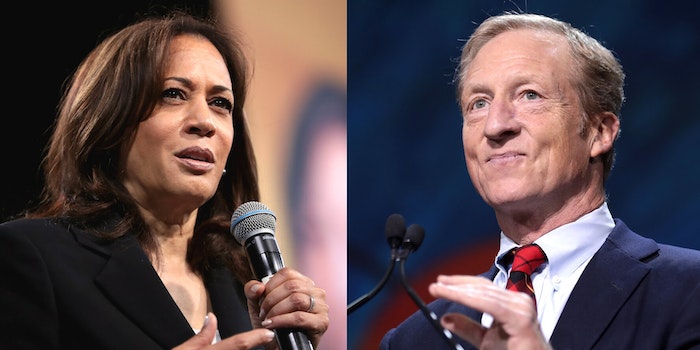 The campaign announced on Monday that the staffer resigned.

The staffer, Dwane Sims, got the data using an account he had created when he worked for the South Carolina Democratic Party, the Post & Courier reports.

Heather Hargreaves, Steyer’s campaign manager, said last week they learned that “a staffer had access to data they never should have had access to,” adding that the data was saved “inadvertently” and that Sims and the campaign reported it to the South Carolina Democratic Party and Democratic National Committee (DNC).

However, Democratic party officials have a different understanding of how it happened.

After Sims left his job with the South Carolina Democratic Party his accounts were closed, the party told ABC News. The party says Sims used an account that they did not know about to access the data.

Sims did contact the party about having access to the data. However, ABC News reports that logs show that Sims called the DNC at 2:56 p.m., but the data was downloaded during the 12-minute call (at 3pm).

Hargreaves also said Sims’ computer was “wiped,” according to CNN.

Steyer campaign spokesman Alberto Lammers defended the former staffer to Post & Courier, adding that he reached out to the party to inform them of the access.

“We are talking about 180 seconds in a system that is notoriously inaccurate,” Lammers told the news outlet. “And the DNC is not disputing the key fact that our employee proactively approached them to inform them of the matter. The bottom line is that nothing would have taken place if the DNC had been more diligent about the security of voter data.”

Meanwhile, Steyer said on Twitter that he was “deeply disappointed” and had reached out to Harris.

“I was deeply disappointed to learn of this situation, and have personally reached out to @KamalaHarris. To every organizer who is putting in the work for a candidate they believe in: I’m grateful for your efforts. Your hard work is what will defeat Donald Trump in 2020,” Steyer wrote on Monday night.

I was deeply disappointed to learn of this situation, and have personally reached out to @KamalaHarris. To every organizer who is putting in the work for a candidate they believe in: I'm grateful for your efforts. Your hard work is what will defeat Donald Trump in 2020. https://t.co/5uAj2cyAuA