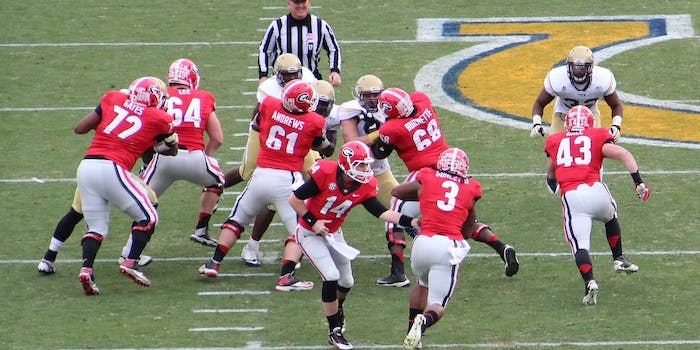 A suspended star running back is affecting Geogia's race for governor.

University of Georgia star running back Todd Gurley was suspended indefinitely last week after he was accused of accepting money to sign autographs. Gurley is one of the latest college stars accused of an infraction that has also caught up the likes of Johnny Manziel, Jadeveon Clowney, and, most recently, Jameis Winston. Georgia officials are keeping mum regarding Gurley’s status for Saturday, and Bulldogs fans are not happy.

It can be argued that no player in the country matters as much to his team’s success as Gurley does, because he accounts for 36 percent of his team’s offense.

No one knows this better than Jason Carter, a Georgia state senator and the Democratic nominee in Georgia’s gubernatorial race. In a move as subtle as it was brilliant, Carter tweeted out his support for the embattled player, holding up three fingers in a photo next to an old Georgia football program. “#FreeGurley,” his caption read.

The move was praised by Georgia fans on both sides of the aisle. It also sent Gov. Nathan Deal scrambling for his cell phone. Not wanting to be outdone or appear like he was anti-Gurley, Deal declared that he’d been down since day one and accused his opponent in this year’s election of being a carpetbagging Gurley fan.

It would be interesting to see more politicians take stances on the NCAA’s rules regarding amateurism and players’s rights to profit from their own likenesses. After all, for the Georgia governor at least, the race just might be decided on the football field.